While I was staying at Roots Yard in the Volta Region (see post about that here – https://travelwithzoe.org/2018/05/11/roots-yard-ghana/), I had a few extra days with nothing planned. I asked the owner for recommendations, and she named a few things. One which caught my attention was a big local market by a lake with traditional wooden boats which I might potentially be able to get a ride on. This description was enough to convince me to go, so I asked for directions.

She gave me a photocopied hand-drawn map on an A4 sheet of paper (quite different from good old Google Maps), and told me that it was very simple – all I had to do was either walk or take a route taxi along the main road to a village called Dzake, and then follow the path (the only path visible when you enter Dzake, apparently), and keep walking along it until you reach a main road (this will be an area called Anum), then wait there for a tro-tro (minibus) to pass, and tell the driver you want to go to Dzemeni Market.

I repeated these instructions to her about 5 times to make sure I had it all planned out in my head, and off I went with my phone (essential for taking pictures, obviously), the paper map, some money (hidden in my bra as usual) and a little bottle of water.

Step 1, finding a shared/route taxi to Dzake, was very easy. I just figured out from the map which way Dzake would be, stood on the appropriate side of the road, and stuck my arm out at every passing vehicle. After about five minutes, one stopped for me. Once we reached Dzake (only a five minute journey), he asked me where exactly I want to get out. I said “near the path where you can walk to Anum”, and he laughed and said “why do white people love walking so much?!”. I guess maybe the majority of Ghanaians only walk to places because they have to, rather than for fun. Anyway, I told him it’s because it’s interesting to see different things in a new country.

The path was dusty and surrounded by woodland and farmland on both sides, so I was thankful for the occasional shade from trees, as it was a really hot day, and I think my sun-cream had already sweated off by this point. I was imagining the path being quite busy with people going to and from the market, because apparently it only happens once a week and it’s one of the most important ones in the area. I was surprised when twenty minutes had passed and I literally had not passed a single human. It was at this point that I realised that I’d never asked how long the path is! 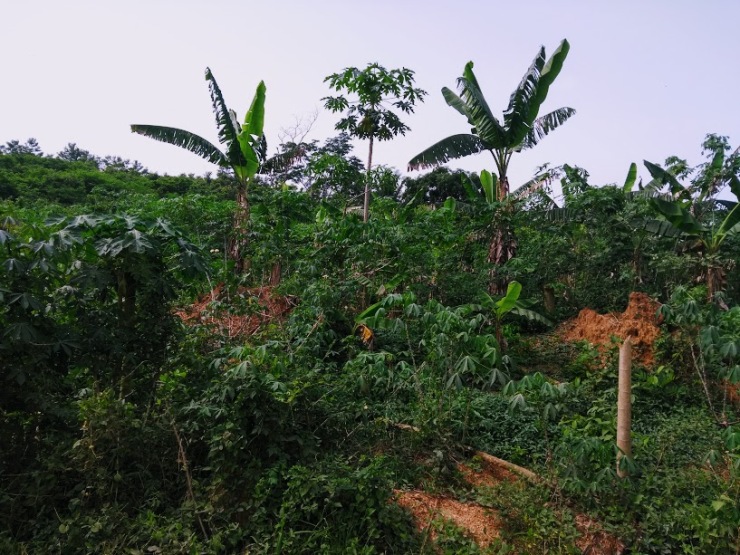 I was very grateful for my water bottle, because the walk seemed never-ending and I was feeling more and more dehydrated. The fact that I had no idea how much longer it would take was actually quite exciting in a sense, and the fact that I was basically lost (not really lost, but it sounds better like that) in the middle of a Ghanaian forest was also quite exciting, so I took some selfies (yes, that’s one of the things people do in 2018 when they’re excited). The purpose of this one was partially to show how sweaty I was: 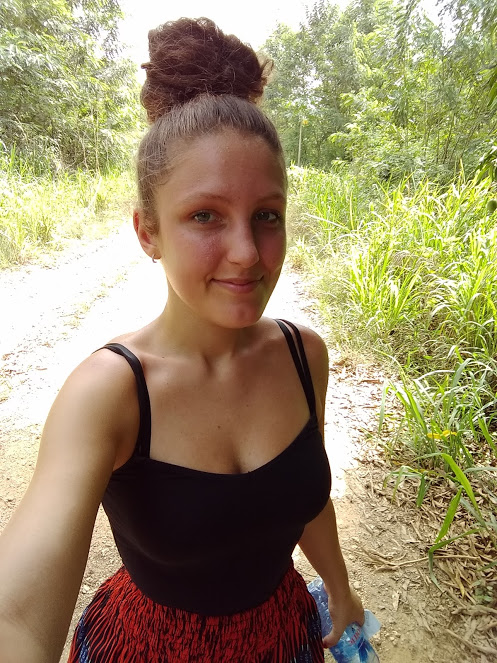 After about 45 minutes, I was wondering if I was every going to make it!!! By this time, I had passed two farmers with machetes, but they couldn’t speak English and they turned off into a field soon after I saw them, so we only exchanged a quick greeting. Soon after, I passed an old couple (also with machetes). We also had a language barrier, but I managed to convey that I was very tired and hot and wondering how far it was to the main road. They found this hilarious and probably thought I was quite pathetic, and they laughed and signalled that there wasn’t much longer to go. 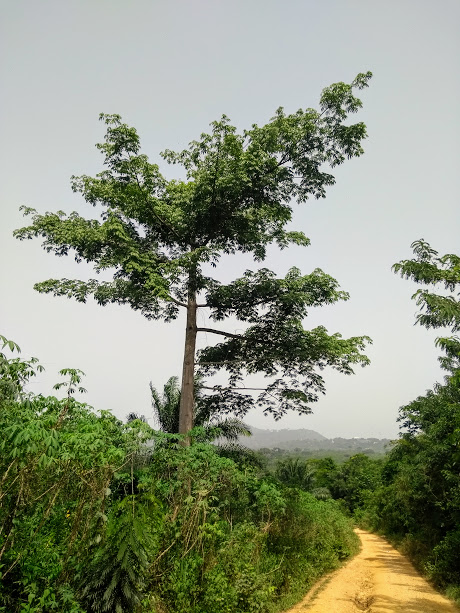 Finally I reached civilization (I’m not sure how long it took because I didn’t look at the time when I started… but I think at least an hour). There was a main road at the end of the path and there was a tro-tro passing as I was reaching the end. I waved my arm at them and it stopped, which meant I basically had to run to it to avoid keeping everyone waiting (not ideal at the end of the trek along the path!)

The ride to Dzemeni Market was about 20 minutes. It stopped in a busy tro-tro park in the market, and the vibes felt really chaotic as soon as I stepped outside. I mainly wanted to see the lake and the boats, but I couldn’t see it, even in the distance, and I had no sense of where I was, so I just walked in a random direction and hoped for the best.

The ground was very uneven so it was important to watch my step, and I definitely felt a lot of eyes on me, which is fair enough because I looked very different from everyone there, of course. A lot of people were trying to get me to stop and buy their products (ranging from grains to vegetables, shoes, fabric and phone chargers), and I just didn’t really know who to stop for or where to look. It was kind of intense but not scary, and I commend them for trying their best to sell their products!

Unfortunately I didn’t take any pictures of the main market areas because I didn’t want any extra attention, but this is a picture of some fabric I bought (21 cedis – about £3.30 – for 3 yards). 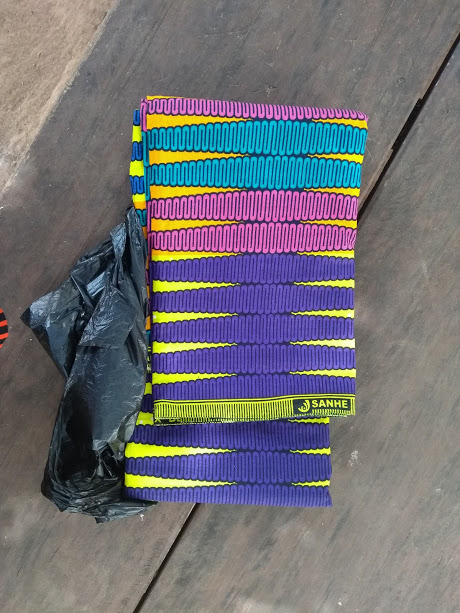 The ladies I bought the fabric from were hilarious (despite the language barrier). I actually sat with them for about 10 minutes because they’d made a kind of roof out of tarpaulin and sticks, so it was great for escaping from the sun for a bit. They were trying to make their grandma speak English with me, and laughing at her because she was so bad, and they were basically doing the same trying to make me say things in their language. The grandma was also playing with my hair in a ridiculous way, making everyone giggle. It was one of those moments where I thought “and this is why I travel!”

I asked them where to find the lake, and the waved their arms in a certain direction, and eventually I found it and headed over to it. It was huge and there were at least 50 boats, all painted with different patterns. The area by the lake didn’t have market stalls, but it was still bustling with people selling snacks from boxes on their heads etc: 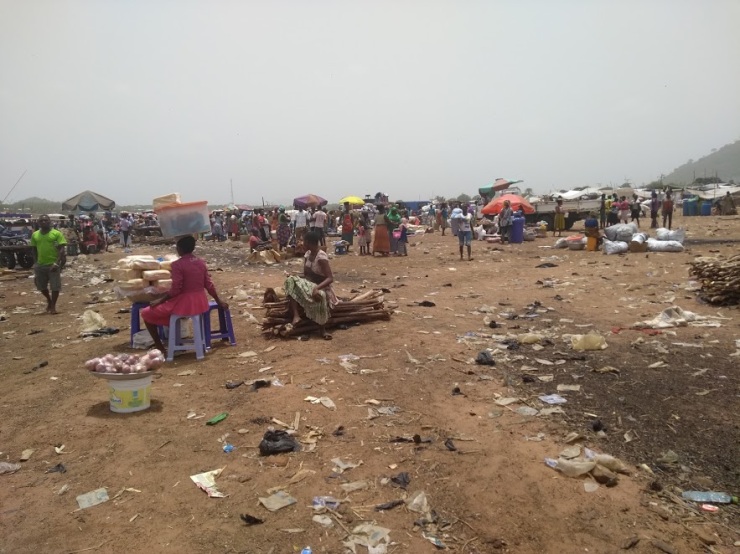 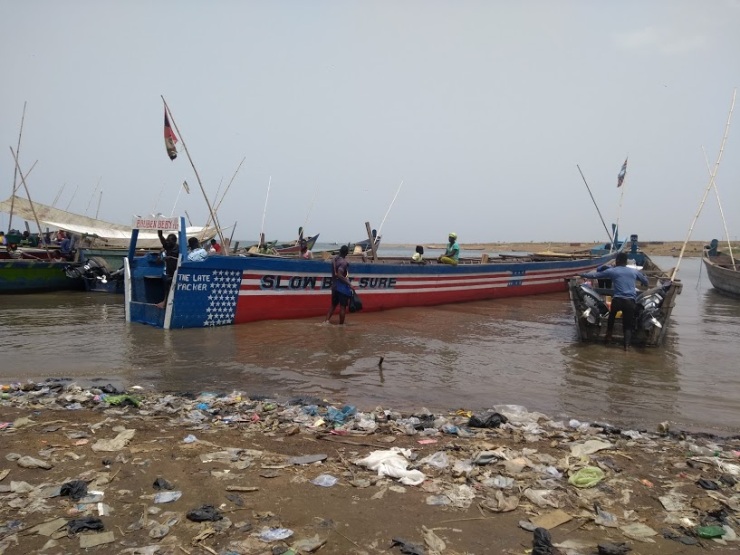 I wasn’t really sure how to go about getting on one of these boats, so I just wandered along the shoreline hoping something would happen. Eventually two men around my age started asking me what I’m looking for etc., and their English was quite good which made it easier, so I told them I wanted to go on a boat. They were a bit confused and wondered why I’d want to do that, so I said something “we don’t have these boats in England, so I want to experience it”.

They explained that the boats arrived there in the morning from settlements at other points along the lake, to bring people and their products to the market to sell, and that they would wait there until the end of the market day and then they’d carry everyone back to their hometowns. This obviously meant I couldn’t go for a boat ride, seeing as they wouldn’t be returning there that day, so I’d end up stranded in a random town along the lake.

I decided it would still be cool to just sit in one of the boats, so the guys told me to pick a random one, walk in the sea up to it, and ask the driver if I can get on. I followed their instructions and picked a cool looking boat with a driver who only looked about 18. He let me on (it was actually quite difficult to get on because I basically had to climb over the engine) and he even took pictures of me: 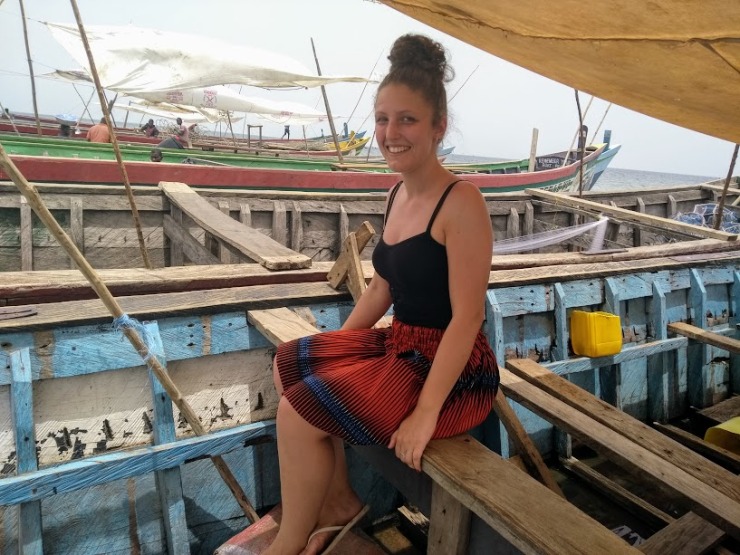 The boat already had some products in that people had bought at the market and had loaded on for when it would return to their hometown later: 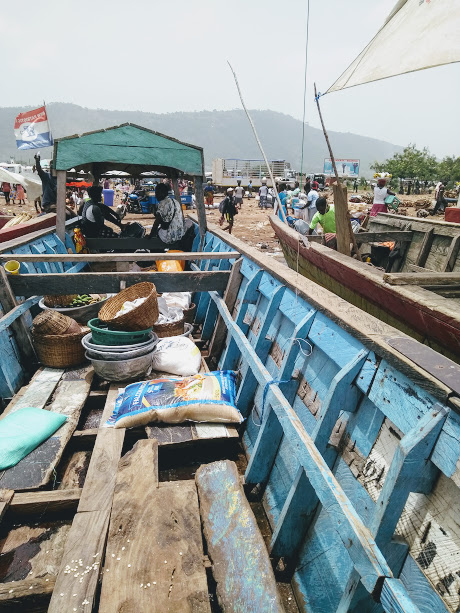 The owner told me he helped to build the boat (this could have been a massive lie – I have no idea), and he said he goes fishing when he’s not transporting people.

Of course, the people on the nearby boats found my little photo-shoot incredibly funny (I guess it’s their version of if I saw someone having a photo-shoot on a London bus), but whenever people laughed at me in Ghana, it was never in a malicious way. It’s hard to explain but you could feel the love at the same time and I also found it to be a good way to try and convince them that Ghana is beautiful too (it’s common for them to see Western countries as the only beautiful ones)… so on this occasion I told the people on the next-door boat something like “These boats are so pretty so I want to show them to my family and friends in England!”

After chatting with the boat guy for about 15 minutes and catching some nice sea breeze, I headed back to the tro-tro area (via a pineapple vendor), got proposed to through the window while I was waiting for my tro-tro to leave, saw a goat being tied to the TOP of a tro-tro, and set off on my way home.

This time I took the tro-tro all the way back to Asikuma Junction so that I could take a shared taxi to Roots Yard from there, rather than having to walk down the path again.

I don’t think I need to say any more… If you ever find yourself in that part of the Volta Region, feeling adventurous with no plans on a Thursday (it’s only on once a week I think), then I hope you will make your way to Dzemeni Market!