When looking for things to do in a new country, you can’t really go wrong with a waterfall adventure. Wli Falls came up on Google as being a good one in Ghana, and it was accessible from Roots Yard, my accommodation in the Volta Region, so I took a day trip there.

To go there from Peki (the village where Roots Yard is), I took a trotro (shared minibus) to HoHoe (20 cedis), the nearest town to where Wli Falls is. The trotro drivers will probably laugh at you (in a nice way) when you try to pronounce HoHoe, and I’m no expert, but it’s something like “Hoh-Hoi-eee”. (One of the biggest ways I had to go out of my comfort zone was trying not to sound ridiculous whilst pronouncing city names to drivers!!!)

The road between Peki and HoHoe was like nothing I’d experienced in my life. Apparently the journey used to only take an hour, but it now takes at least 2 and a half. The tarmac from the road has mostly worn away, so the trotros now drive on uneven, dusty beige surfaces.

They want to use the smoothest part, which means they constantly change to whichever side of the road looks best. I rate their driving skills because somehow we didn’t die, even though our trotro was racing along the wrong side of the road with another one zooming along towards us countless times. They always wait until the last possible moment to swerve back to the correct side! This is one of the better parts of the road: 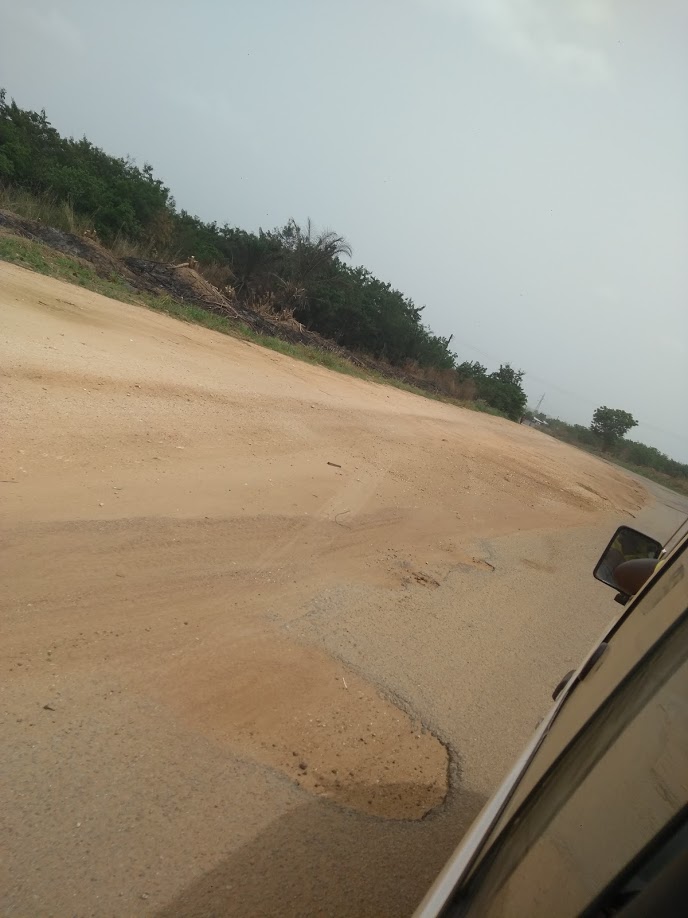 In HoHoe, you can get out at the trotro/bus station which is a very busy and hectic square with people zooming around selling all types of food from their heads, and ‘mates’ (bus loaders) shouting their trotro destinations left, right and centre. Just tell them you’re going to Wli Waterfalls and they’ll put you on the right trotro.

The trotro from HoHoe to Wli Falls takes about half an hour, and you can follow the signpost from where the driver let you off. You just have to walk a few minutes to the little visitor entrance building. It’s completely in the middle of a quiet village – it doesn’t seem touristy at all, although there are a few guest houses there for people visiting the falls.

Inside the building, I paid 20 cedis for the lower falls entrance fee (this is the easiest one to walk to) and then the lady shouted someone’s name and a loca boy who looked about 16 appeared. She pointed to him and said “you go with him”. Obviously this meant he was my guide… but as you will know if you’ve read a lot of my blog posts, I always prefer to discover things by myself, without a guide (I mean, I need my daily dose of adventure/adrenaline).

I told her I want to go alone, and she took out an old notebook, opened it onto the most recent page, and handed me a pen. I was slightly confused at first, but by reading the other comments on the pages, I realised this was the book of disclaimers for people who decide to go without a guide… so I just wrote “I have decided to go without a guide” and wrote my name and the date below. In England we have to sign disclaimers for everything, so it didn’t worry me at all.

After signing my life away, I bought a bottle of water from the shop next door (PLEASE REMEMBER TO DO THIS IF YOU GO!) and walked through the visitor centre to where I assumed there would be an obvious path. It was a bit strange for the first few minutes. There were lots of people washing clothes in a river, and there were no signposts or anything, and no tourists to be seen at all. Once I got onto the main path, it looked like this for most of the way:

For the majority of the time, I could hear nothing but the insects and birds. It took me an hour to walk to the falls, and I only passed a few local kids and one man with a wheelbarrow the whole time. I knew I was on the right path because I kept seeing these signs:

I found it really odd that I didn’t pass any tourists, and I did wonder on a few occasions if I should be scared or not, seeing as I was in the middle of a random forest by myself, but it was still quite relaxing and liberating at the same time. I was very glad I had the water because the constant walking did make me quite sweaty, and of course there was nowhere to buy drinks.

The walk itself wasn’t really steep or anything. I did it in flip-flops. Finally I heard the unmistakable sound of a waterfall, and I could not believe the size of it! It was far better than what I was expecting, and I definitely hadn’t seen a waterfall that tall in my life. I was seriously amazed.

There were about 10 other people there, half Ghanaians and half tourists. Some went swimming under the falls and some were just having a picnic on one of the few benches. I hadn’t brought a bikini so I just walked in it up to my shorts. There actually is a changing room (surprisingly), and I think it would be worth bringing a change of clothes so you could go in. 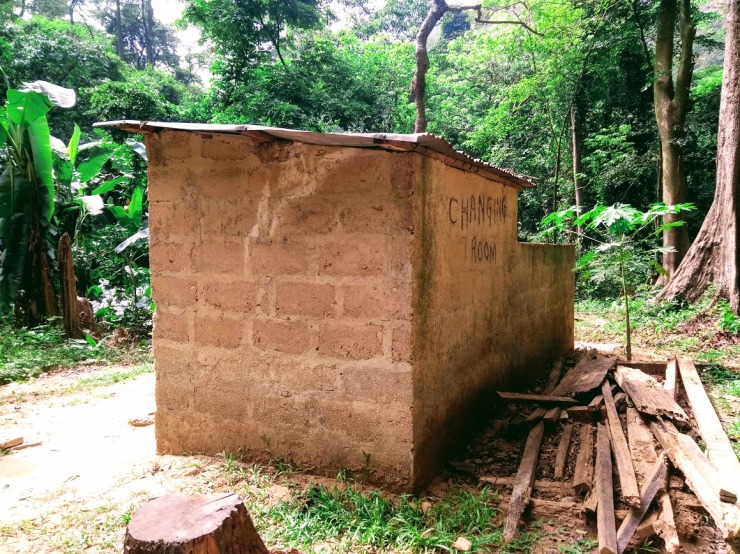 I sat on the bench and just relaxed for about an hour, just watching the water/people etc. If I was with friends, I probably would have stayed even longer. I spoke to a local guy who works nearby and often goes there on his days off, and he was quite taken aback when I said I walked alone without a guide. He said it’s normally fine, but that there have been cases of Ghanaians from other villages hiding in the bushes there to jump out and steal tourists’ phones/bags, but he said it hadn’t happened in months.

I decided to be slightly cautious for the walk back, by starting my walk about 10 minutes after another group, so I knew they weren’t far ahead and I could always speed up to catch up with them if I felt like it.

On my way, I had noticed an interesting looking house by the path, about 1/3 of the way from the entrance building. On the way, I resisted my urge to have a closer look, but on the way back, curiosity took the better of me, and I opened this gate: 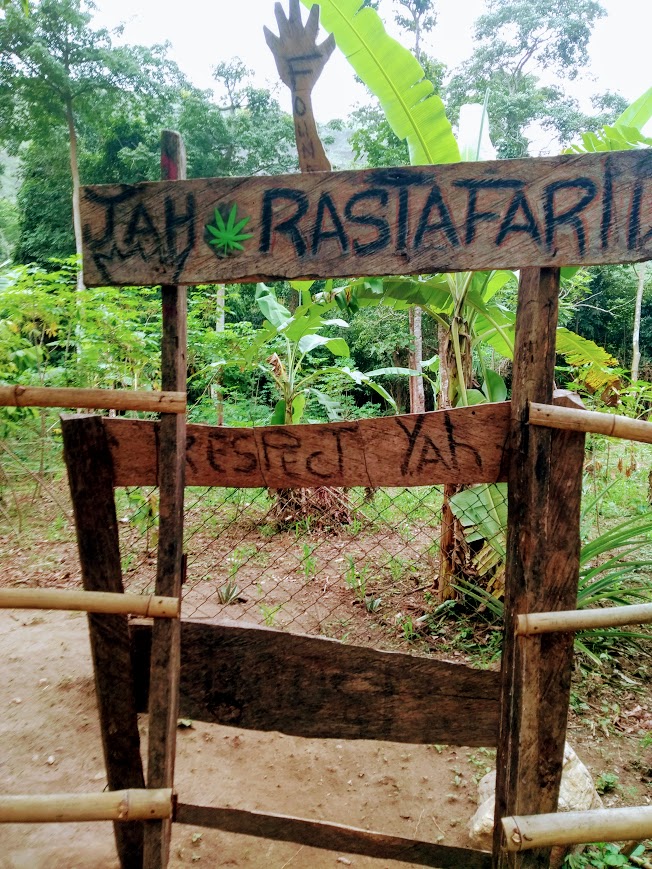 (I’m quite easily lured in by rustic rasta looking places).

As soon as I moved the gate, a rasta man appeared from inside the little house and told me to come in (exactly the result I wanted!!) so in I went…

He introduced himself (his name is Kwame) and he was also quite surprised that I walked by myself etc. He was also shocked that I was planning to travel all the way back to Peki that day, seeing as it was already after 4pm. I asked what the deal is with him living there, and he explained that it’s his house and he has a spare room where he lets travelers sleep in exchange for “however much money they feel like giving”.

He showed me the spare room, which had a concave double bed with a mosquito net, and nothing else really. It was definitely very rustic and basic, but I think it would be a GREAT adventure to stay there. I would have considered it if I had my stuff with me and hadn’t already booked another night at Roots Yard.

This is his “kitchen”… 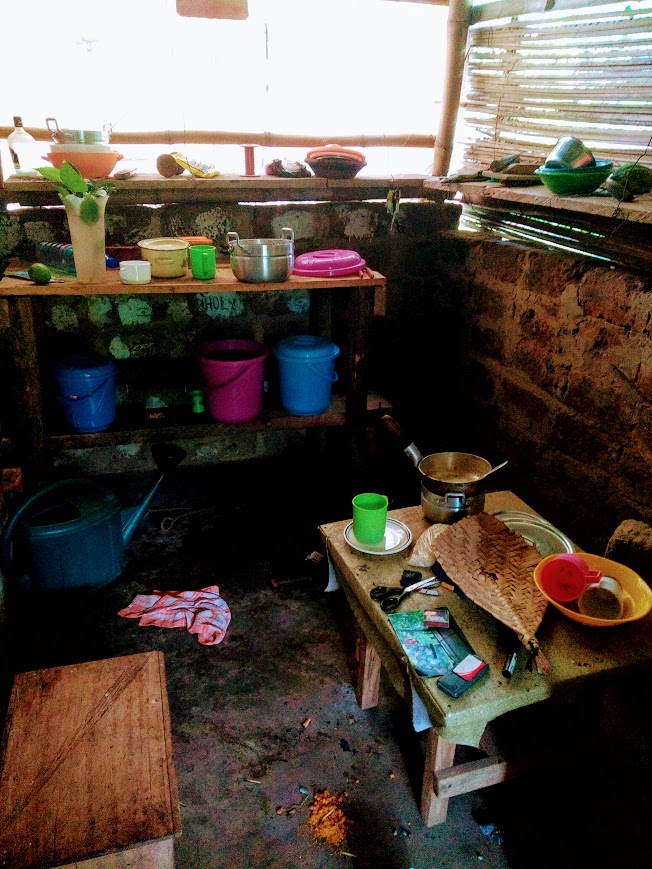 This is the front of the house:

I was really intrigued by Kwame’s little house, but I wanted to try and get on the trotro at HoHoe before dark, so I had to leave. If you’re feeling brave, I hope you’ll go and find Kwame and stay with him. Please let me know how it goes if you do!

Anyway, I made my way back to the entrance building without any problems, and I figured that to get back to HoHoe, I should probably stand on the main road where I got off the trotro, but on the opposite side of the road, and stick my arm out at any taxi or trotro.

This plan worked, and I ended up basically sitting on an old man’s lap in the front seat of an extremely full little taxi, much the amusement of the ladies in the back. One of them even moved my hair to put it on top of the bald man’s head to see what he’d look like with long/curly hair. Top quality banter if you ask me!! (Banter is an English word for jokes, basically).

Once in HoHoe, I took a trotro heading to Accra, as Peki is basically half way between HoHoe and Accra so they’d just let me off on the way. Speeding along as the sun was setting, with the wind blowing on my face, passing palm trees and cute little houses was actually very enjoyable (not for everyone else apparently, seeing as they all just slept…)

After we’d been on the road for about two hours and outside was pitch black, I started to become a bit concerned that the driver would forget to let me off in Peki and that I would have no idea if/when we had gone too far.

I had a Ghanaian SIM card with data, so thankfully I could check on Google Maps where we were. As we started to get close to Roots Yard, I started very obviously looking out of the windows, and thankfully the guy next to me woke up so I asked him if he knew about Roots Yard and if he could help me find where to stop.

After me repeating “RASTA… GUEST HOUSE… ROOTS YARD” about 5 times, he eventually said “OH!!! Bob Marley?” and made a dreadlock signal. The Roots Yard owner is called Bob and has really long dreadlocks, so I assumed we were on the same wavelength, and said yes.

Thankfully we were indeed on the same wavelength, and he shouted to the driver at exactly the right moment, and I used my phone torch to help me get from the main road down the little track to Roots Yard, feeling very fulfilled by the day’s adventure!