On the Friday, we decided to take a random trip to the capital city, Espargos. We’d been told that you can either go on a tour, in a taxi, or in a local minibus for 100CVE (1 euro). Of course we took the minibus option. There weren’t really any signs in town about any buses, so we just walked around hoping to find them and eventually had to ask for directions. They’re near the roundabout at the entrance of the town and you just have to look for a line of about 10 minibuses and go and get into the one at the front. We had to wait about 20 minutes for it to fill up with people, and the guy next to me had a giant bucket of fish which I guess he was going to sell in Espargos:

It wasn’t the nicest smell ever, but oh well. We were the only tourists on the bus, and it stopped at random points along the journey to let people off. Just wait on it until everyone gets off (that’s how you know you’re in Espargos) and hand your money to the driver once you’re off.

We didn’t know what to do in Espargos so we just walked around and went into some shops because there were a lot more clothes shops there than in Santa Maria. The supermarkets were also bigger and had more variety in Espargos. Another difference was that in Santa Maria, everyone tried to speak to us in English whereas in Espargos their attitude is more like “you’re in Cape Verde so speak Portuguese”, which I kind of like. I have a really basic level of Portuguese but it was enough to get by with simple things like asking for directions and asking if there’s vegetarian food.

The first restaurant we went into said they could make something vegetarian, so we said we’d have two plates of it, not really knowing what it might be like. They brought us rice with vegetables and plantain:

It actually had a lot of flavour and it was only 300CVE each (3 euros).

The buildings/streets in Espargos looked a bit more traditional than in Santa Maria, maybe because there are less hotels etc:

There’s a main square with some bars and restaurants and this church in the middle: 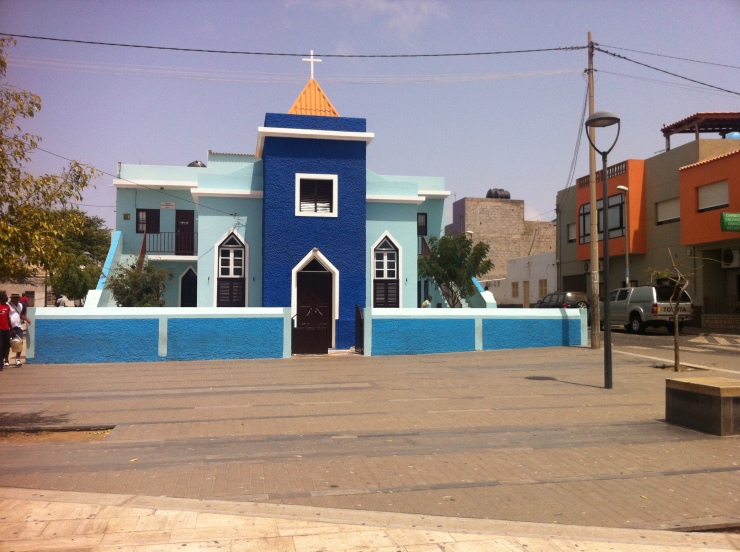 Overall I would say it’s worth it to go there just to wander round and escape the tourist shops etc, but there isn’t exactly much to actually do there.

From Espargos we took a taxi to Pedro Da Lume (tell the driver you want to go to to the Salinas) to go and see the salt mines (Sal got its name because it used to produce so much salt). The official taxis look like this, and most have the name or nickname of the driver on the back. This one that I’m walking in front of says ‘No Stress’ which is the thing that everyone says in Sal (like their version of ‘Jamaica No Problem’)

Anyway we paid 5 euros in total for the taxi to the Salinas (salt mines), which was probably a rip-off but we couldn’t really do anything about that, and it wasn’t exactly expensive anyway.

The entrance to the Salinas is 5 euros per person, and once you’re inside you’re free to walk around everywhere and go to the little souvenir shop which sells 1 kilo bags of salt (produced there, because they still produce it on a very small scale) for 1 euro. They also sell things like ‘mud masks’ for your face and body made from mud from the salt mines.

These wooden things are what is left of the transportation mechanism to get it from the mines up to the village:

As you can see, aside from the fact that you pay for entrance, it hasn’t really been developed into any kind of tourist attraction or museum:

There was even a big shovel and a pickaxe on a mountain of salt that anyone could just pick up and use.

Some people had brought swimming stuff to go into the salt lakes but I was in jeans so opted for just standing on the side:

When I asked the lady in the gift shop why the salt is no longer mass produced, she said it used to be owned by a French company but they didn’t want to keep doing it, and she seemed to be suggesting that if a foreign company wanted to invest in it, it would probably re-start. The conversation was in Portuguese though so we couldn’t really go into detail.

We wandered around the village of Pedro Da Lume for a while, contemplating if a taxi was ever going to pass to take us back home because most people had come in tour buses. Everything seemed more old fashioned there than in Espargos and Santa Maria, like this little church:

Thankfully after about half an hour, a pick-up truck taxi thing passed by and we paid 1 euro each to go back to Espargos to catch the minibus back to Santa Maria.