If you only have a few weeks in Brasil and you’re moving around, you probably have the difficult task of finding the most important things to do in the limited time you have in each area. I spent two whole days in Salvador by myself (plus some half days when I was travelling to/from it) and I’d like to share the places I went and things I did, as I think they gave me a good Salvador experience overall.

Side note – I stayed at The Hostel Salvador, which I would definitely recommend. It had the cleanest bathrooms of any hostel I’ve ever stayed in!

Anyway so… The first place you HAVE to go in Salvador, which I’m sure you’ve seen mentioned in every Salvador article you’ve read, is Pelourinho. This is the old part of town and its main draw for me was the street art, which you can find just by wandering around – you don’t have to go anywhere specific for it.

Another cool/random thing in Pelourinho is the Elevador Lacereda, which you can find in the main square which is probably where you’d arrive in Pelourinho. It’s a lift/elevator that only takes about 10 seconds and takes you from the lower part of the town to the upper part.

As you can see in the sign below, you only have to pay 15 cents. You put it in the turnstiles (so make sure you have your change ready before) and then try not to get shoved out of the way as everyone’s trying to get into the lift before each other. It’s quite manic because loads of people use it, but it’s something you should do just for the random experience, and you can look down at the city from the top.

Also by the main square is the craft market. Normally I’m not really into these, as they’re super touristy etc., but I decided to go into this one anyway and it’s actually super chilled and really cheap, and I ended up buying a painting for like £3 to put up in my room at home.

The buildings (including churches) in Pelourinho will probably leave you staring at them or taking pictures of them. You seriously need to just wander around as many streets as possible there and see what surprises you find…

If you’re in Pelourinho and you fancy eating some vegan food in a really relaxing spot a little bit away from the busy streets, I would one hundred percent recommend Rango Vegan. You can find it easily on Google Maps but it’s on a really steep and winding hill that Ubers might struggle with so I’d say it’s better to walk from the main part of the town. The food isn’t expensive and you can sit outside at the back and catch some breeze. I think this was probably the nicest food I ate in my time in Brasil.

Aside from Pelourinho, if you’re feeling adventurous, you could go to Sao Joaquim Market. I have a rule where I try to wander around a big/local market in any new country, and this one didn’t disappoint. It’s kind of hard to find (I had to show someone a picture from Google Images for him to tell me where to go), but once you find it, it’s super interesting.

As well as being really hectic with loads of colours and smells, it has vendors selling candomble things. Candomble is an Afro-Brazilian religious tradition and the things they sell for it are similar to what you’d imagine at a voodoo ceremony.

If you’re feeling really brave, you could do what I did and walk around inside the market until you find a table of men playing dominoes, go over to them and say hello (“bom dia” if it’s the morning or “boa tarde” if it’s the afternoon) and ask them if you can play – “posso jogar?”. The men didn’t actually let me play (I don’t think the believed that I knew how), but they gave me a drink and pulled up a chair for me to watch, which was a cool experience.

To leave the market, you should definitely take this opportunity to go on a motorbike taxi. There are a few of them parked up outside, so just go up to one and say the name of where you’re going and ask them how much (“quanto?”) and agree a price before you get on the bike (you’ll need to know numbers in Portuguese for this but you could always use your hands). Trust me on this one – zooming through the streets on the back of a bike(especially during sunset as I did) with the wind in your face in a new country is sooooo liberating. Just don’t forget to hold onto the guy’s shoulders for extra balance if he starts doing mad turns to get through traffic.

If a dark and dirty market where everyone will be staring at you and talking to you in Portuguese doesn’t sound like your cup of tea, you could go to the Barra Lighthouse. Personally I just did this for the walk (I walked along the coast for an hour to get there) and I didn’t actually go inside, but you can obviously go inside and take in the views from the top. It costs around 20R (£4). When I went, it was kind of busy and I just wanted to sit on the grass as I was hot and tired from walking! 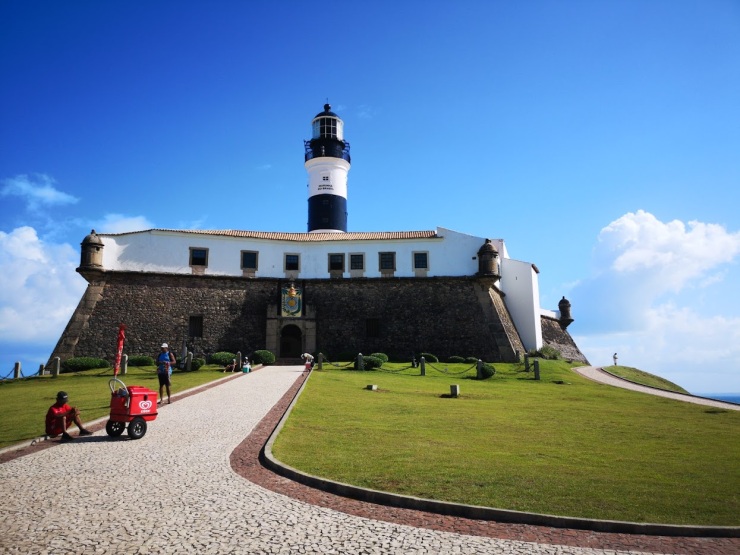 Near-ish to the lighthouse is a popular beach called Praia do Porto da Barra. This is NOT the beach that you can see from the lighthouse. It’s a 10 minute walk in the north direction instead. The reason I’d recommend this beach instead of the one by the lighthouse is that it has an amazing sunset (make sure you go at this time) and it has a really vibrant atmosphere – mostly Brazilian people, and loads of vendors selling different Brazilian food and drinks.

Look how perfect the sunset is!!! 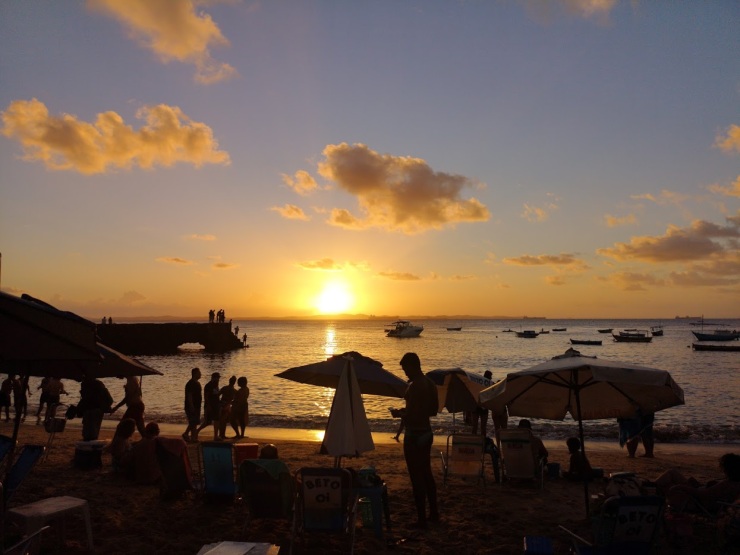 That’s the end of my list for Salvador, but of course there are other things to do that you’ll find when you’re there. I found it easier to feel like I was experiencing Brazilian culture in Salvador than the other places I went in Brazil, so if that’s important to you, I’d definitely suggest you make the time to visit.

Also, some people say Salvador is really dangerous etc., but I wouldn’t say this should stop you going there. My main piece of advice would be to keep your money and phone in your pocket or bag unless you have to use them, and don’t walk around at night by yourself (so basically the same advice I’d give for anywhere).