One thing you can’t really go wrong with when travelling is national parks / walking trails… I mean, who doesn’t love a good view?! A bonus is also that they often tend to be free or cheap.

The main national park in St. Lucia is called Pigeon Island, and it’s in the North. Getting here by public transport is simple enough but it does require a lot of walking. Step one is to get a minibus to Gros Islet and stay on until the last stop. From the last stop, you can see the sea and a little local beach. At this point, you just have to walk along the beach for as long as you can (when you reach the beach from getting off the bus, walk along to your right).

After walking along the beach for about 20 minutes, you’ll come to a fancy resort called Landings, but all the beaches on the island are public, even if they’re by a resort, so keep walking. You could also use this is a chance to jump in the sea for a bit if you want, as the water is quite nice along that stretch.

Keep walking past the beach umbrellas etc, and you’ll reach a water crossing (basically there’s a man-made area of water which means you need a boat to cross, as there is no sand for the next 15 metres or so. Stand by the crossing and a resort staff member will appear and take you across in a little motor-boat.

Once you get off at the other side (about 10 seconds later), you’ll almost be on the beach from the next resort (Sandals). There’s a fence that you aren’t meant to walk through, so it’s up to you what you do next. These are the options:

On the way to the national park, I took option 1, but on the way back I took option 2 because I realised it would involve less walking. If you take option 1, you’ll be walking along quite a peaceful road that looks like this:

Also, if you take option 1, you’ll pass an area outside the entrance to Sandals with some taxis waiting for hotel guests, and there’s a little shelter where you can sit and buy a coconut to drink for $2EC (less than £1). Personally I had two coconuts and chilled in the shelter talking to the vendor for a while, as I was quite sweaty from walking in the sun.

Whichever option you take, you can’t really go wrong, as you’re just walking in one direction, and you can’t miss the entrance to the national park once you arrive.

When you reach the national park, you pay at the entrance and the fees are less for locals than tourists. You can pay in either US or EC dollars, and it’s $8US or $22EC for tourists.

Inside the national park, there are various walking trails, benches to sit on, ruins of old buildings, hills to climb up etc., a restaurant and a beach. I just wandered around randomly, chatted to people and found some good views:

I also found a rocky hill/trail thing which I climbed up and enjoyed the breeze and views at the top: 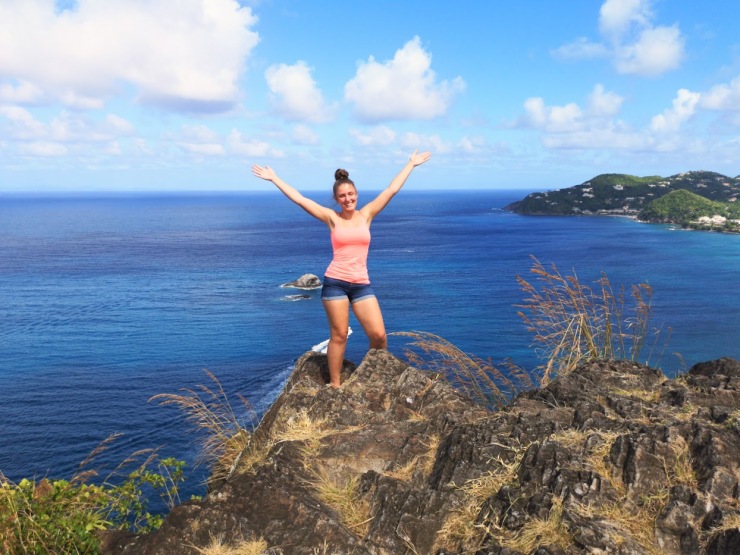 I spent quite a few hours inside the national park, and you could definitely make a day of it if you brought swimming stuff and/or a book and/or a picnic and/or speakers/music etc.

The beach right outside the entrance gate is called Pigeon Island Beach, and it has a lot of little beach bars/restaurants, so I decided to eat at one of them rather than inside the national park. Their prices aren’t bad, and it’s pretty nice eating at their tables in the shade where you can people-watch or just listen to the sea.

If you spend the day here like I did, please don’t make the same mistake as me in thinking that putting suncream on once in the morning will be sufficient for all the walking you’re going to do in the sun. It’s easy to forget that just because you travel a lot, it doesn’t mean you’re invincible to these things. Anyway, I’ll refrain from posting my sunburn selfie on this post.

Also, if you’re like me and just travel with flip flops, don’t worry, you can do the hikes at Pigeon Island in flip flops 🙂