I felt like leaving Kingston for a few days on my days off, so I booked a random AirBnB in a community in the Blue Mountains called Sunning Hill.

To get to Sunning Hill from Kingston, you take a coaster bus (minibus) to Morant Bay from downtown from outside Mothers Express patty takeaway. There are two Mothers downtown… one by the market and one a bit further from the market. It goes from the one further from the market (but just ask people). This costs $250jmd (so like $2.50 US) and takes a little over an hour.

Once you’re in Morant Bay, ask someone where the route taxis to Sunning Hill go from, and follow their directions (I can’t really remember where I walked, but it wasn’t far at all). The taxi from Morant Bay to Sunning Hill is $200jmd and takes what felt like about 45 minutes, but maybe it was only half an hour or something.

The place I was staying at was run by this rasta man and his family: 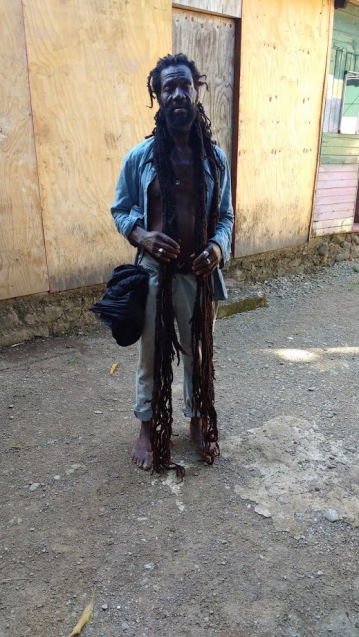 He’s got a couple of these huts on his land and rents them out at $25 US per night for one with a double bed: 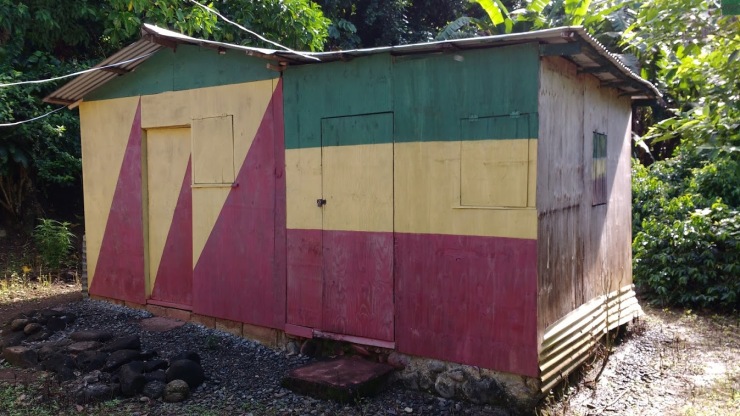 They’re very basic… Inside there’s just a shelf and a bed and a power outlet. There’s no fan so you just open the windows. The toilet and shower are in a hut at the back of the garden so it’s a bit annoying if you need to use it when there’s torrential rain, but other than that it’s no problem.

The place is literally 1 minute from the river, which is where a lot of the villagers wash their dishes, clothes and themselves. Pretty convenient! 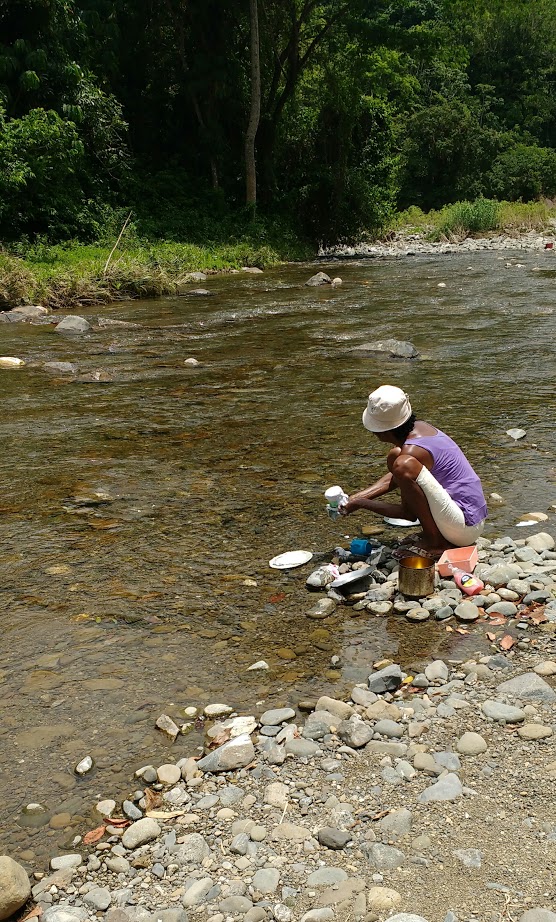 If you walk for about 10 minutes through a path in the bush, you get to a part of the river which is better for swimming in: 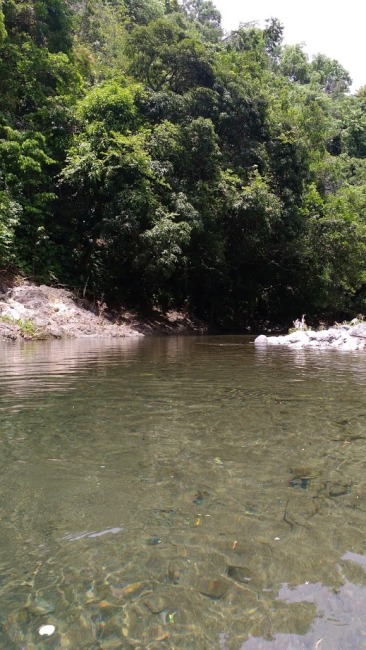 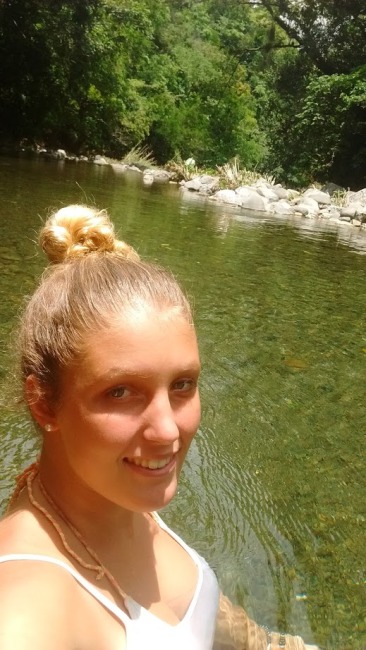 There was no one there but apparently in the summer, it’s full of people who come from different areas and bring picnics etc.

My first day was mainly spent at the river and playing with the rasta’s grandson, Rati: 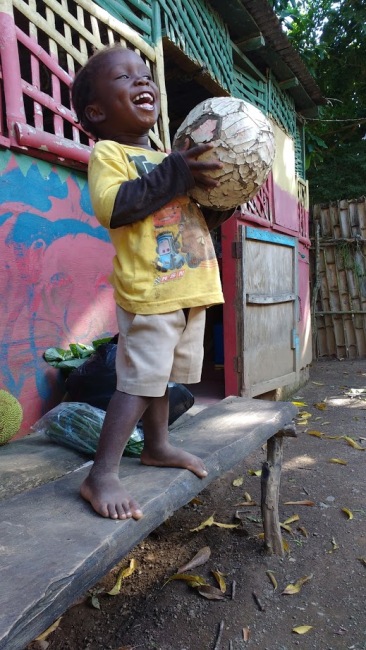 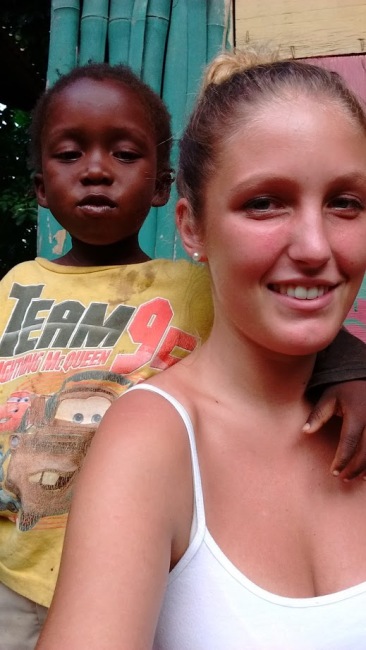 On my second day, I decided to just go for a walk and see what Sunning Hill is like. The views are pretty much like this everywhere you walk. Can’t complain really…: 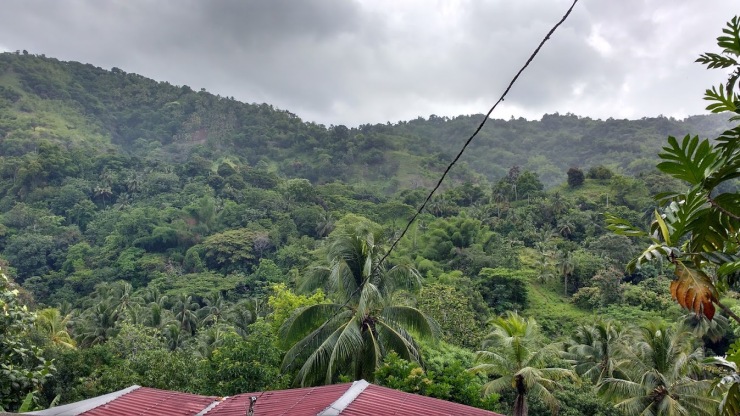 The river runs through the whole village so most people’s houses are only a few minutes from it, and there isn’t much there except a school and a few small corner shops. As you can probably guess from the photo, rain started to fall soon after I took it. When rain falls in Jamaica, it falls HARD so you basically have to go inside. Thankfully I happened to be standing a few metres from a little bar, so I went inside…

It was right next to a family’s house (the family who runs it) and one girl came up from the house as soon as she saw me, telling me about a party she’s putting on next week and saying I should go to it. I told her I probably wouldn’t be able to because I’d be back in Kingston, but we ended up talking for a while and her cousin bought me a beer.

I ended up playing dominoes with her cousin and some other family members in the bar for a long time, until they switched to a gambling card game which I don’t understand: 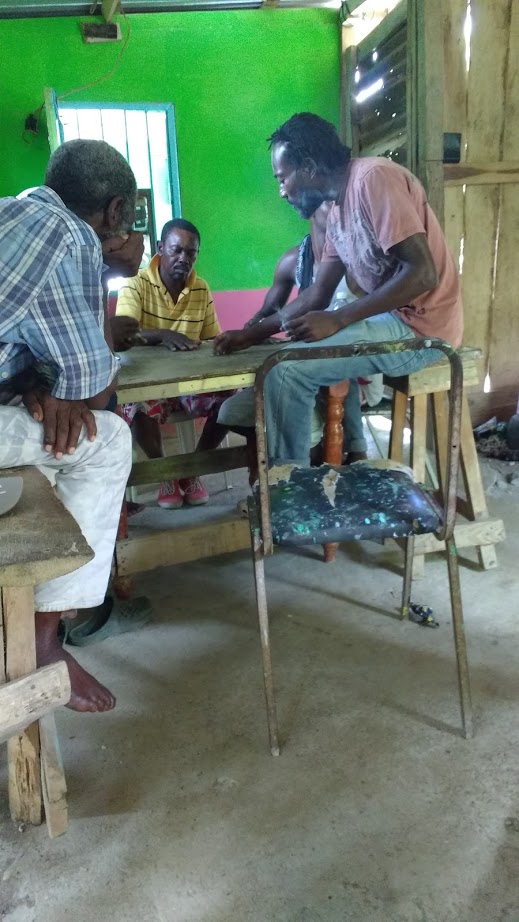 The girl said I could go and chill with her at the house, so I did, and I met the rest of her family too. There were a lot of people living in one house, but the setting was awesome. They have a bit of land below the house near the river where they have about 5 pigs and lots of fruit trees. Her cousin picked me some star apples (a purple fruit which I’ve never seen in Europe) and they have an outside sheltered kitchen where they cook LOADS of food.

The rain stopped (and started again a few times) but I ended up staying at their house all day, just talking with all the different family members etc. They even cooked a separate vegetarian dinner for me! It was great because they treated me so normally, for example they gave me the vegetables to cut up, so even though I was the guest, they weren’t treating me like a queen/alien.

One annoying thing about Sunning Hill is that it doesn’t have any phone service, so if you go there, it’s probably a good idea to let your family know you’ll be completely without signal for a few days. When my signal came back, I had messages from my family who were really worried about me because there’s never a time when they don’t see me online for that amount of time!

I think it’s important when you’re travelling to try and see the different sides/aspects of the country you’re in, and Sunning Hill can be useful for that because it’s a really small, traditional community with a completely different vibe from Kingston and the other towns, so I would recommend it if you have the chance to go there.