On my second day in Jamaica, I wanted to go and explore a random area so I took a bus to the supposedly dangerous Downtown Kingston with a girl and a boy from the hostel I’m staying at in the centre of Kingston.

The JUTC buses are the easiest and probably safest option of public transport in Jamaica because in the terminal there’s actually a sign saying which stand you need to wait at for which destination, and there’s an information desk if you need any more help, so it’s quite easy to find the right bus.

You pay when you get on and the fare for my bus was 100jmd (equivalent to 1 US dollar). I think this is similar for most routes. They stop a lot of times along the way and you just press the red button when you want to get off.

To go to Coronation Market, just find a bus with the destination ‘downtown’.

If you have a local sim card with data, you can just follow on Google Maps to make sure you get off at the right place. Google Maps also actually tells you which buses you can take if you select the ‘public transport’ option when looking for a route from A to B.

As soon as we got off, I saw my favourite type of man – a jelly coconut man! I wasn’t sure how much jelly nuts should cost here and I was very aware that we might get ripped off, but he charged me 100jmd which seemed reasonable.

I later found out that 100jmd is the standard price, so I was happy that he didn’t take advantage.

We walked down the street that seemed to have the most things for sale, and loads of people stared, shouted or spoke to us. Some were annoying boys shouting stupid things like “WHITEY!” to me and the other girl. Some were simply trying to sell us things (fair enough), and some wanted to know where we were from and what we were up to.

Also, just to warn you, the moment you take out your phone or camera, local guys will start posing and shout “snap me!”. Sometimes this results in you taking a picture of them posing and a friendly conversation happening after, or sometimes they turn out to be annoying, or sometimes you can just ignore them.

This guy seemed quite friendly and after trying to sell us cold water, wanted to take a selfie with me. It was quite funny. 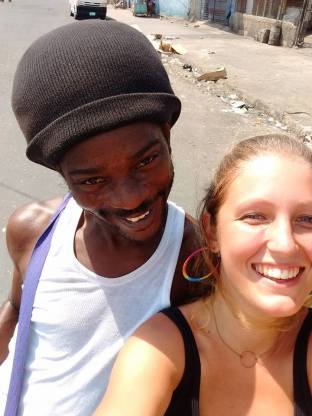 From what I understood from these random conversations with people, the main market day is Saturday, and even during the week it’s quite packed, but we went on a Sunday which is the day when no one really goes, which may be why people noticed us so much, because the streets were quite empty. This also meant that the main part of the market, the inside part, wasn’t open that day.

People also told us we should be careful and stick to the actual market street, not go any further into downtown because, according to our new friend who sells fish, there are often gunshots there. This is the fish lady whose name I’ve unfortunately forgotten:

In general I tried to keep my phone in my pocket and only took it out to take a few photos. The atmosphere seemed fine, not particularly intense or scary, but the fact that we were being noticed by EVERYONE and they didn’t really have anything else to concentrate on (because there weren’t many people shopping) made me feel a bit weird.

As well as the stalls, there were mobile vendors like the snow-cone man:

We took the bus back from pretty much the same place we got off at, and we just asked a market vendor which numbers we could take and where exactly we should wait for it.

In general I would recommend going on a weekday or Saturday, going with someone else or a few people, preferably including a man, finding out the approximate prices of anything you plan to buy beforehand by asking a local person and sticking to the main market streets unless you know a Jamaican who’s taking you to another part.