Crop Over was the main reason I went to Barbados – I love carnivals and wanted to experience one in the Caribbean. The Crop Over celebrations last for months, but the main parts are probably Foreday Morning (jouvert) and Kadooment Day (the carnival procession day). The fetes (parties/concerts) and Soca Royale (competition to find the winning soca artist) are also an important aspect. Whether you’ve taken part in a carnival before or not, I would recommend getting involved ‘like a local’. Here is how to prepare and what to expect from these different aspects of Crop Over.

Soca Royale: Most Caribbean islands have a competition around Carnival time called Soca Monarch.(Soca is a West Indian genre of music). In Barbados the event where the Soca Monarch finals take place is called Soca Royale, and it happens around a week before Kadooment Day (so normally the second half of July). It’s an all day event in a big park with food and drinks tents and a big stage. You can also bring your own food and drinks in.

Soca Royale is your chance to see the most popular Bajan soca artists, hear the songs that will be big on Kadooment day and probably make some new local friends. Tickets should be available from http://www.ticketpal.com but if they’re not on there, just Google search ‘soca royale tickets’. They’re only about $25USD.

I had a great time, as you can see:

Foreday Morning: This is the Bajan version of what most countries call ‘Jouvert’, a celebration to mark the opening of Carnival. It happens on the Friday night (a few days before Kadooment Day which is on the Monday).

To take part, you need to join a ‘band’ (group of people in matching tshirts who follow a music truck down the street). This will cost you about $100US for the t-shirt, little lycra shorts (if you’re a girl), unlimited drinks (alcoholic and soft drinks) from your truck, paint and a goody bag.

You have to register and pay online before you go to Barbados, and then you’ll receive an email about where to pick it up a few days before Foreday Morning. I went with a band called Scrawl Up which I would definitely recommend. Their registration was via http://www.ticketpal.com. Just Google search ‘foreday morning band’ and see which other ones come up that take your fancy (or contact me for other recommendations).

When you pick up your t-shirt package, the staff will tell you the meeting point and meeting time, which will be around 11pm somewhere in Bridgetown. Wear shoes you don’t care about because everyone throws paint at everyone. You’ll be dancing down the road until sunrise without a care in the world, bonding with strangers by putting paint on them. I even got a bucket of sea-water thrown over me for some reason…

It was the best night of my life (I’m not exaggerating) : 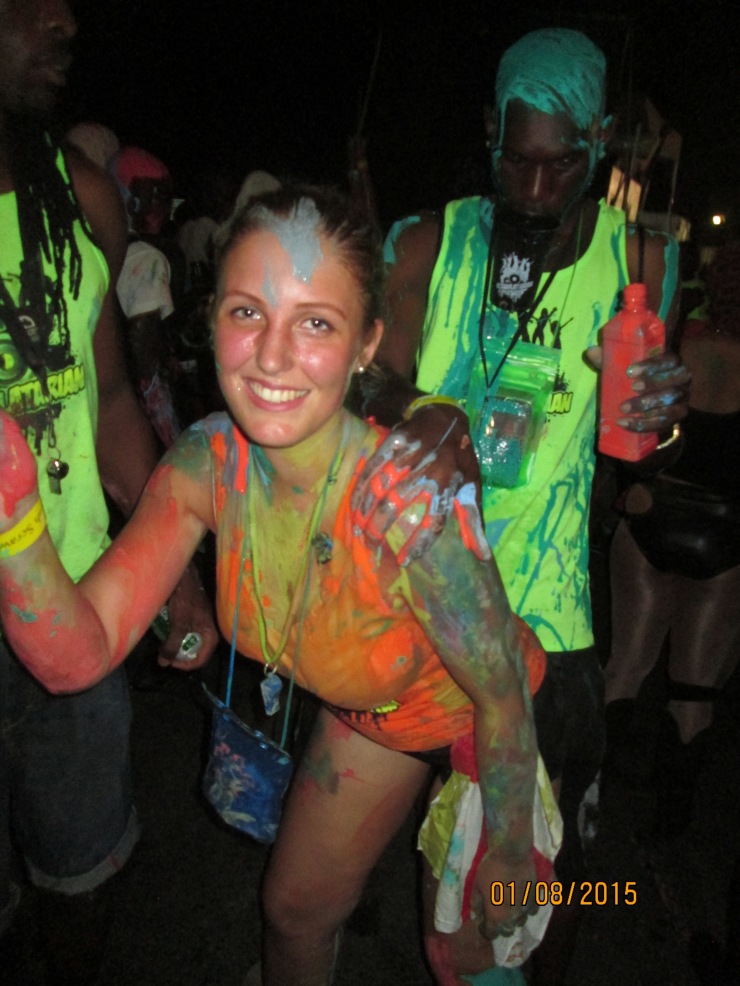 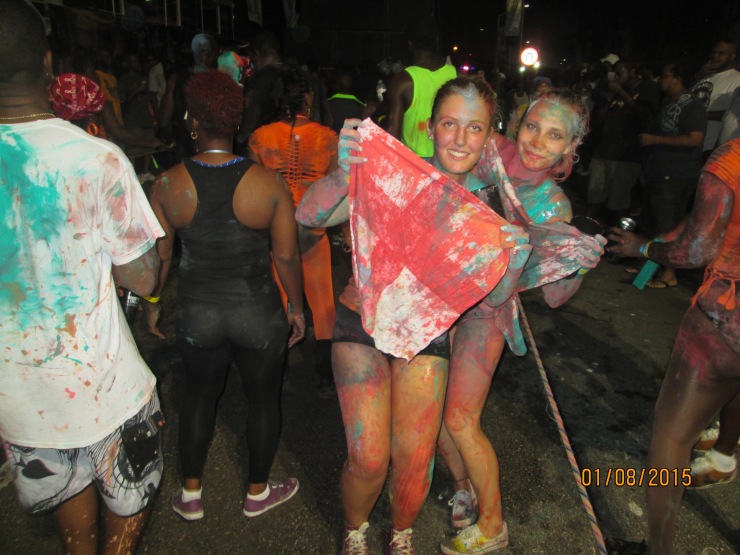 Kadooment Day: This is the day with the carnival procession with all the feathery costumes – pretty much the culmination of the whole of Crop Over. It happens on the Monday after Foreday Morning (around 1st August but the date changes slightly every year).

To take part, you need to join a ‘band’ (group of people in costumes following a music truck). The bands start ‘launching’ (showing their costumes and allowing you to register/pay) around May. I went with a popular band called Zulu International (www.zuluinternational.com). You can follow a page called ‘Crop Over Hub’ on Facebook/Twitter for details of the launches and the band websites.

Joining a band for Kadooment day costs around $500US so it’s definitely not cheap, but it’s worth it. Your package includes your costume made to the measurements you provide, a goody bag, food before and after the ‘jump’ (the jump is the time you spend dancing behind the truck), and unlimited drinks all day. It also often includes free entry to a thank-you party a few days after.

I was enjoying life to the max, as you can see: 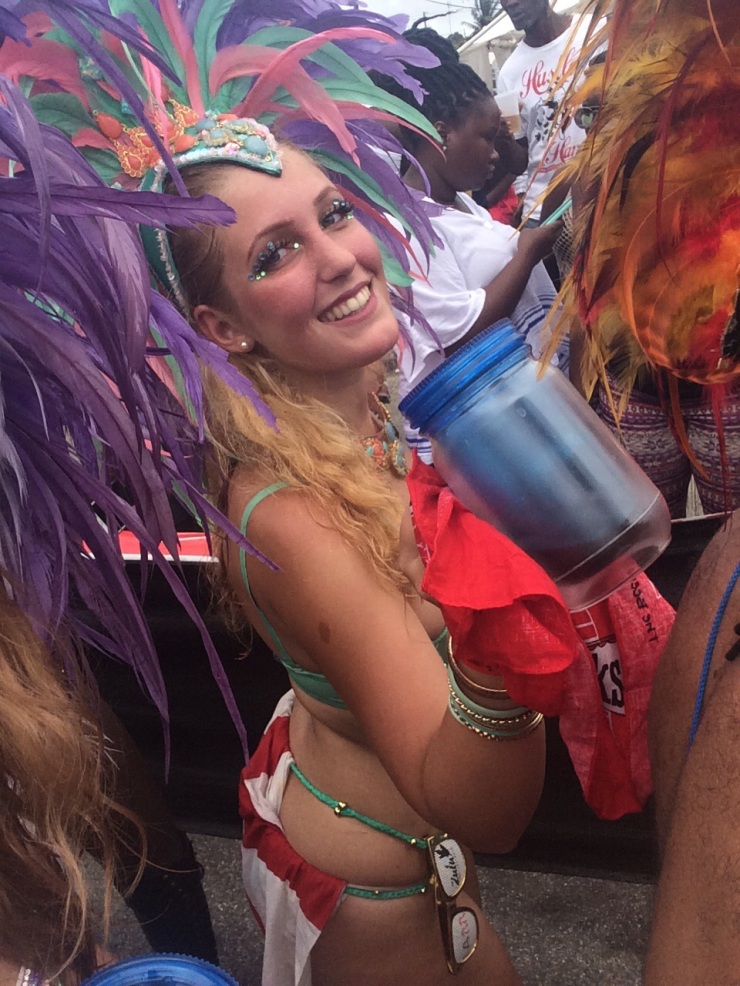 Fetes: Fetes are events/parties/concerts. Around Crop Over time, there are soca fetes almost every night. You’ll see posters and hear radio adverts for them once you’re in Barbados, but you can also pre-buy tickets online before you go from websites like ticketpal.com. Also check out ‘The Crop Over Hub’ on Facebook for news about fetes and tickets.

A lot of the fetes happen outside, like an awesome one I went to called ‘Lil Rick – Night of Champions’ (Lil Rick is one of Barbados’ biggest soca artists). It was in a car park in Bridgetown and there were tents selling food and drink. The dress code for fetes like these is just shorts, a top and sandals…or a casual dress if you want. Expect to pay about $20US or a bit more for these kinds of fetes.

However, there are also more ‘classy’ fetes which often happen on boats. They’re more expensive (from about $50US) but tend to include unlimited drinks and sometimes food. The dress code for these is obviously more sophisticated than for the outdoor fetes.

Fetes are a great way to get in the Carnival spirit before Kadooment, and you will really get to see how Bajans party. Here are some photos from the Lil Rick fete. The ‘Lime’ things are noise-makers from Lime, the sponsor, and it was pretty cool to see a whole sea of people jumping up and down with their Lime things in the air when Lil Rick performed. As you can see, I even got to meet him at the end just by waiting around for a bit after it had finished (the sun had already risen) : 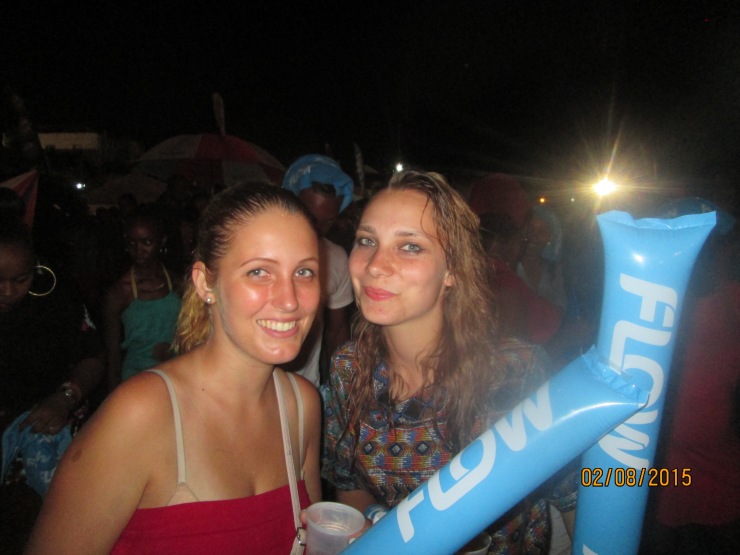