So… One of my best friends, Rose, loves London Zoo and likes doing crazy things. Therefore, when she found out about the annual Streak For Tigers event, where participants are sponsored to run naked around the zoo to raise money for endangered tigers, she was keen to take part. She wanted to do a group entry so I agreed to be part of the team.

I posted on Facebook a couple of times that I was going to do it, to try and raise sponsorship money, and a lot of my friends commented on how crazy I am and how they could never do that, but for me, nothing really sinks in until it actually happens, so I wasn’t really nervous or anything.

When the day came (14th August), it decided to rain even though it had been sunny the whole week. The zoo sent us an email in the morning telling us not to worry because “your skin is waterproof”. I met Rose at Camden station and we followed the instructions in our welcome pack (containing a tiger mask, tiger ears and directions) and waited outside the entrance to the zoo. It was about 6pm so thankfully the zoo was closed to the public. As more and more people arrived who were presumably also there to take part in the streak, we realised that unfortunately there were a lot of old men there who we really did not want to see naked.

At 7pm we got let in and were told to follow a path round to the changing rooms. They had appropriately decorated the area with underwear: 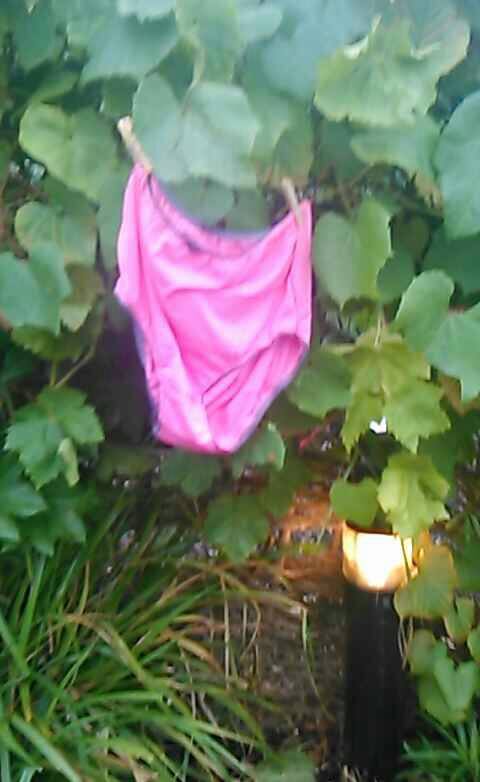 Her other 2 friends who were in the team had joined us, and by this point the giggling had started and we began to question why we decided to do this. As we walked into the changing building we were given a foil blanket and a bag with our reference number to put our clothes into and leave in the cloakroom. Upstairs there were separate changing rooms for females and males, but it was pretty pointless because the “walls” were made of curtains which were completely open at the front, so everyone in the corridor could see in to both changing rooms.

As we were going to the changing room, some men were already wandering around naked, which we found weird and disgusting, and some of the women stripped down within about 10 seconds with no hesitation. Our group, along with a friend we’d made outside called Emma, decided to strip down to our underwear because that wasn’t a big deal, and then figure out how to take the next step. We ended up using the foil blankets as you would use a towel in a changing room, and covering ourselves up with them as we removed our underwear:

Once our stuff was in the locker room we headed outside where there was an area with free shots, gingerbread men and water for us to wait in until the start of the run. Most of the men weren’t using their foil blankets and were acting as if it was completely normal to be taking shots with naked people, but most of the women were still covered in the foil. I guess this isn’t surprising.

This is my team in the shots area. As you can see we were gradually becoming a bit braver:

We tried to peek round the corner to see how many spectators there were, but we couldn’t really see anything, so when the microphone person told us to all throw our foil blankets in the bin and congregate behind the tiger mascot, we had no idea what to expect. On the count of 3 the curtain thing dropped and everyone started running. There weren’t too many spectators (they were just standing around the barriers, there was no seating or anything), but the thing is, there were a LOT of cameras, both with the spectators and the runners (and the media of course).

During our first lap (probably about 300 metres) we didn’t really want to be caught on camera, but in the next laps (we did 2 more) we stopped caring and, for example, stopped to take a photo where everything was showing with a male participant who claimed to be a naturist. I just hope that photo isn’t on Facebook anywhere!

We also stopped to take a photo with the tiger mascot. Here is the censored version:

Everyone was having a good time and we had some random conversations with people during the walking parts (personally I can’t run 900 metres without slowing down to a walk) and once you’d done your desired amount of laps, you could either hang out in the area with the shots and water or go back up to get dressed. We were given a foil blanket as we re-entered the shots area but we didn’t even use them because we no longer cared that we were naked.

Having said that, we weren’t exactly going to stand there for a chat and a drink of water as some of the participants were doing. After we got dressed, we went to check out the tiger area of the zoo which was open specially for us because we’d been raising money for the tigers. We bumped into our mascot friend so decided to take a clothed version of the previous photo:

We were all quite hyper and happy for some reason, and Rose told a couple of random people on our walk home that “we just ran round the zoo naked!!!” We stopped off at a posh Chinese restaurant for a celebratory meal, and Rose insists that we’re going to do it next year. It would be a good idea for anyone who’s looking for a challenge or a way to maybe feel more comfortable about their body. Thankfully we didn’t appear in any of the newspapers, as far as we know…