Twice while I was in LA (I’m home now but forgot to blog about this when I was there) I went to Little Ethiopia, a little street on Fairfax which as the name suggests, has a lot of Ethiopian restaurants on it and a couple of shops and cafes. The first time I went, I ate with Ruth at this restaurant:

It had normal chairs and tables but also low chairs with these table kind of things in the middle that all the food goes on one plate (the traditional Ethiopian way apparently). This is just Ruth’s food because we realised we’d rather have our food on two separate plates (especially considering I’m vegetarian and she was going to eat meat) so after this photo we moved to a normal table:

I ordered the vegetarian combination: 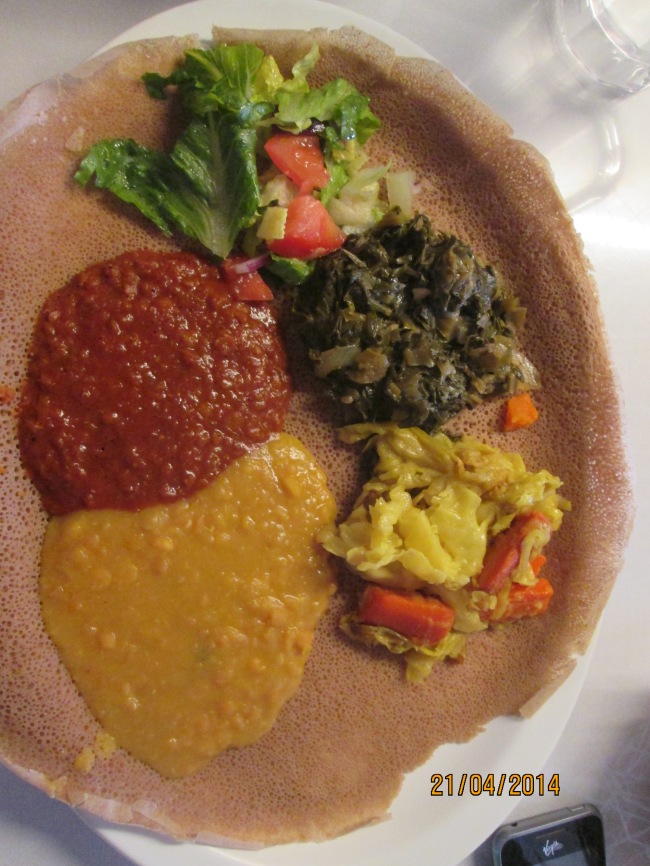 As you can see, the different things are on top of a kind of bread thing called injera. Thankfully I’d had this kind of food before so I knew the deal. Basically you rip a bit of injera off (not from the one that’s underneath the food… from the one that comes on the side or in another bowl) and scoop up some of the food with it and stuff it in your mouth. You end up eating a lot of bread so get full quite quickly. It cost about $10 and was nice and spicy. A gay white couple who came in the restaurant just couldn’t accept that the food came with injera and not rice or anything, so in the end they got it to takeaway and I think they were going to buy rice to takeaway from another restaurant!

We also walked around the shops, some of which sold Ethiopian DVDs and CDs and coffee and scarves etc. One of them was a rasta shop with all kinds of Bob Marley t-shirts, things with the Lion of Judah printed on them, dreadlock hats and incense etc.

On Friday after going for a 2 hour walk with Ruth’s dad and his friend while Ruth was at work, they took me to the only vegan restaurant on Little Ethiopia. It has a buffet from 11 – 3pm and I think it’s every day, for about $10. In my opinion it was more tasty than the other restaurant and there was a big choice of food, like 10 different things to go with the injera. This restaurant decided to cater for western people I guess, because it was serving rice and had forks available too – I was the only white person who was eating with their hands! I would definitely recommend going there if you’re in LA, but don’t be a loser, use your hands and eat it with injera and make sure you wash your hands after!