Normally I ignore all the posters etc advertising tours because half of them are just fancy ways of going to the beaches that I already go to, and the other half mostly include things I don’t particularly want to pay a lot of money to do, like diving. However, the other day (Sol’s birthday) when we’d all had a few drinks, Sol, Hellen and I saw a video advertising deep boarding, a water sport that’s only available here and in one other country (Brasil I think). From the video it looked kind of cool and we decided we were going to do it the next week (this week).

So yesterday evening we went to the tour office called Under The Sea Tours and it was pretty simple, we said we wanted to do deep boarding at 3pm for 3 of us, and they said it was fine and we had to pay a $5 deposit each then and then the other $10 each when we came for the tour. They didn’t say anything else really, just “see you tomorrow here at 2.45pm”.

So today we arrived at their office at 2.45 and they asked if we’d brought tshirts to wear over our bikinis in the water. Obviously the answer was no because no one had told us this was necessary and we only had the clothes we were wearing over our bikinis which we were going to take off before we got in the water. They said they’d lend us some of their Under The Sea tshirts because sometimes bikinis fly off during deep boarding.

Basically all 5 us of us (the instructor included) would be holding onto plastic boards and wearing masks in the sea. The plastic boards would each be attached by a rope to the back of a boat, which would then proceed to drag us through the sea. The instructions were basically “shout at me if you have a problem, or wave or something. To go down into the sea, take a deep breath and tilt the board down and it’ll take you down. To go back up, tilt the board up and you’ll pop up to the surface like a cork”, and off we went onto the boat.

Here you can kind of see the 5 boards stacked up on top of each other:

As you can see the rope is quite thin, and from the videos it looked like the boat was going to go quite fast, so me and Sol weren’t too convinced we were going to come out alive and she warned her mum that if she didn’t message her by 6pm she was probably at the bottom of the sea. Don’t be fooled by our smiles in this photo! 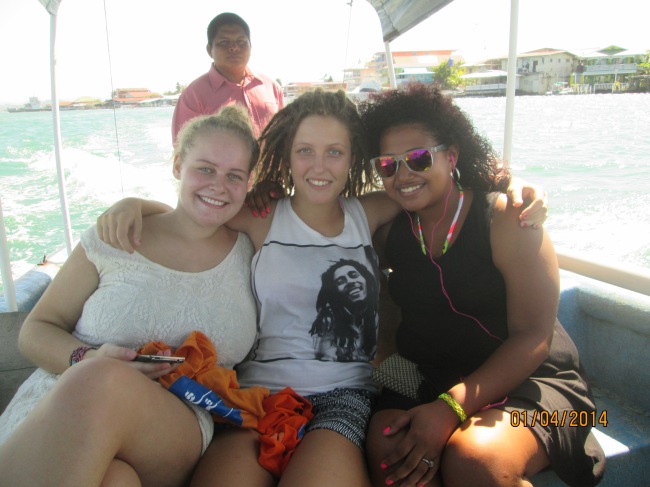 The boat took us to Hospital Point, a popular place for scuba diving and snorkeling, which is around the back of Isla Solarte. We put on the lovely orange t-shirts and the masks, and were told to just have a swim around in the water while they set up the boat. “Swimming around” with a weird mask on my face that doesn’t allow me to use my nose for breathing isn’t exactly my forté, and I kept swallowing sea-water, much to the amusement of Hellen and Sol. After about 10 minutes we were each given a board, and I was thankful that the instructor was the middle person and I was positioned next to him, so if I was about to drown hopefully he would realise and come to the rescue. There was about 1 metre between each person.

The boat driver shouted “listos?” (ready?) and even though no one really said yes, started the boat up. The instructor and the guy on my right (the American guy who was also coming on the tour) and Hellen almost immediately tilted their boards down and were gliding through the water like fish, but me and Sol were just looking at each other for a while like “ummmmm…”

One thing that was kind of hard was that the boat was creating little waves/splashes so to get air, which obviously you could only do through your mouth because of the mask, you had to kind of wiggle your head around trying to find a bit of air that wasn’t going to come with a free dose of sea water.

Anyway after a few minutes I decided there wasn’t much point paying $15 if I wasn’t going to tilt the board down and swim (well get dragged along) next to the coral etc, so I kept going down a bit for like 3-second intervals. I was too scared to go really far down like Hellen because firstly, it wasn’t actually that deep and I was scared I would accidentally tilt down too far and crash into some rocks, or that I wouldn’t be able to tilt it up enough to get up for air, but I had a pretty clear view of everything so I don’t think I lost out on much. The last time I saw coral was when I was snorkeling at the Great Barrier Reef when I was like 10 so I don’t really know what’s good coral and what’s average coral, but there was definitely some crazy stuff down there that I didn’t know existed in the sea.

One negative thing I noticed though, was that my bikini bottoms weren’t exactly staying all the way up, so I had to keep trying to keep that situation under control by only holding onto the board with one hand and rescuing the bikini bottoms from falling off my bum. If you’re going to do this, you should wear shorts as well as a t-shirt! I was comforted when Hellen and Sol told me after that they were having the same problem of unruly bikinis.

After we’d been in the water for about 15 minutes and Hellen had done some crazy turns in the water, Sol decided she’d had enough because she couldn’t breathe and Hellen kept crashing into her, so she got onto the boat and tried to take some photos of us. This is me (when the boat was going slowly because it was just starting up again after Sol got out) taking advantage of non-wavy water to get some air:

In total we were deep boarding for about half an hour, and then came the challenge of getting back into the boat, whose edges were significantly higher up than the surface of the sea. I think the boat driver almost broke his back trying to pull me in, but I guess he’s used to it.

My arms and hands ached so much when I got in the boat, although I didn’t realise they were aching in the water, which is good. We were happy to have come out alive and were looking forward to getting a smoothie from Tropical Birds as soon as we got back to Bocas! 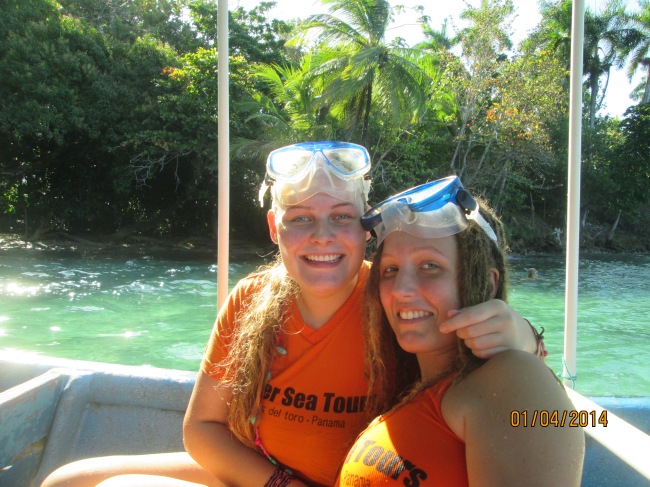