Monday 3rd March was the 3rd day of the Panama Carnival celebrations in Bocas del Toro. I’d seen the day before that there was “mojadera” (“wetting”), basically people spraying you with water from giant hoses, in the street, and I thought it looked fun so on Monday I woke up at 11.30am to make sure I got there in time for it. I put on my bikini and some shorts that could get wet, tried (and failed) to wake up my neighbours to come with me, and so headed to town by myself and bought a water pistol.

The tank was already there but no one was spraying when I arrived, so I sat in a cafe and ate some breakfast (well popcorn) waiting for the action to start. Once the man climbed to the top of the tank and started firing, some kids ran into the water:

Their friends all joined them and within about 5 seconds there were around 20 kids chasing each other in the water. I couldn’t see any of my friends around so I was a bit hesitant to just run in there with all these local children so I waited a while in the hope that someone I knew would appear. Lissette, a really cool Cuban woman whose salsa classes I used to go to when I lived in the hostel, passed me with her really cute child, so I sprayed her with my water pistol and she said I should follow her son into the water, and I did, and there was no going back. I was soaked after one spray of the giant hose and it was so powerful! When they sprayed it in my face I thought my eyes were going to be pushed all the way into the middle of my head:

(Lissette took those pictures on her phone).

After a while some adults joined (mainly drunk men) and when I’d been in there for a little over half an hour, I decided it was time to get out, and unfortunately the sun wasn’t out so I was absolutely freezing and obviously didn’t have a towel or anything. I remembered that after going swimming as a child, I always ate a snack after, so I thought there must be some scientific reason for this (like it warms you up or something) so I bought some food and after I dried off a bit I went home to snuggle up in bed with my teddy for a while.

After a longer than anticipated nap, I put on some party clothes and cycled to the park with Hellen and we arrived just in time to mix some drinks and get a spot on the street to see the “diablitos” (devils). This was the only non-creepy one: 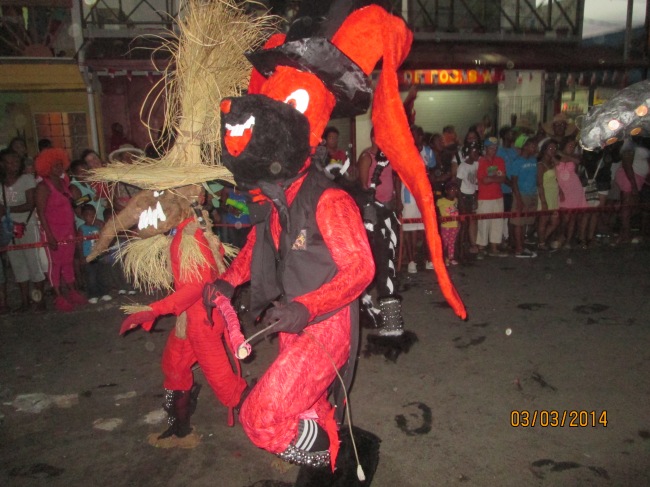 It was funny because some of them came over and shook our hands or danced in front of us or whatever and we didn’t know who was under them (probably someone we knew because everyone knows everyone on the island) so we didn’t know how enthusiastic to be etc (depending on if we like the person or not). Two friends had previously shown us their masks so we knew how to spot them. This is us with our friend Trey in his disgusting mask:

The devils stayed on the street for about two hours, doing their usual stuff (whipping people who provoke them, dancing and marching around, shaking hands with people or going up to them sneakily to scare them etc). Later on, around 10pm, there were a few bands going along the road playing drums etc and loads of people followed them, jumping and dancing around, like at Notting Hill Carnival in London (except bands are definitely not be allowed to march as late as 10pm in Notting Hill). The carnival queens also made an appearance: 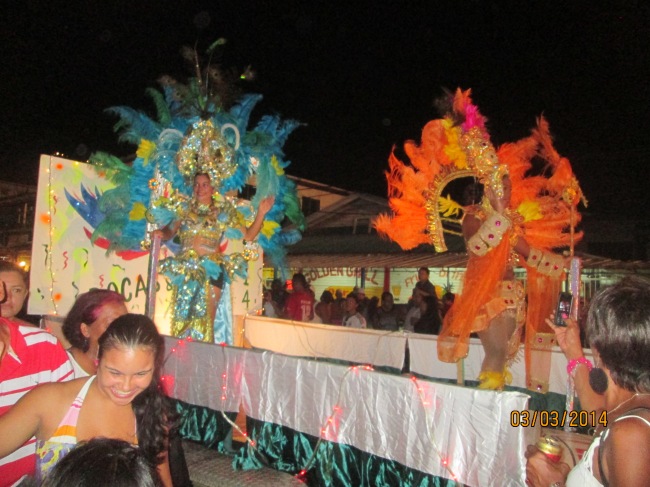 Nothing was really different from the day before (see my post about Part 2 for that), and we danced at a sound system for a bit. One thing I forgot to mention in Part 1 and Part 2 is that I’ve been surprised throughout Carnival about the lack of non-Panamanian tourists. Everyone knows that all the hotels and rental apartments are fully booked during Carnevales, so I was expecting to see loads of people from all over the world, but the only extra tourists I’ve seen are from the Panama mainland (mainly Panama City), and even the usual backpackers who are in Bocas haven’t been partying in the park etc, which I find a bit weird/silly… surely you should want to take part in cultural events like this if you’re travelling?!

Anyway, at around midnight I lost Hellen and my phone wasn’t really working (maybe because there were a lot of people in one area using their phones so the network couldn’t cope), so I hung out in Munchies for a bit and bumped into some other friends who were going to Iguana bar. I’m not a fan of Iguana but they persuaded me to go there with them for a bit. At 3am I left there and passed through the park on my way home and the police were just starting to shut everything down (I think… or things shut themselves down and the police were just there to make sure the drunk people didn’t make problems on their way home).