Today (Sunday March 2nd) was the second day of Carnival here in Bocas. Luckily I woke up without a hangover (and without the desire to drink again) at around 1pm and I got to town at about 3. Even before I reached the park area, I could tell that it was more crazy than yesterday, by the noise and people:

As I got closer I realised everyone was being sprayed by a giant hose. I’m sure the water coming out was even more than what comes out of a fireman’s hose! They were not messing around. You would be 100% soaked after being sprayed with it for one second! People obviously knew this was going to happen because they were all in bikinis etc and a lot of them had water pistols. It looked really fun but I was in my normal clothes so decided I should probably avoid it. You can’t see it being sprayed in this picture but it was coming out of the big tank on the left and the sprayer-poeple were standing on top of the tank:

Even after the tank went away, some people continued spraying each other with water pistols and most people were still wearing their swimming stuff to do whatever they were doing (dancing/eating in the park etc). Me and Hellen just found some chairs near a music system and drank some beer (when we said we weren’t drinking we meant spirits).

At around 6 the “diablitos” (devils) came out, but today there were more than yesterday and they stayed for longer: 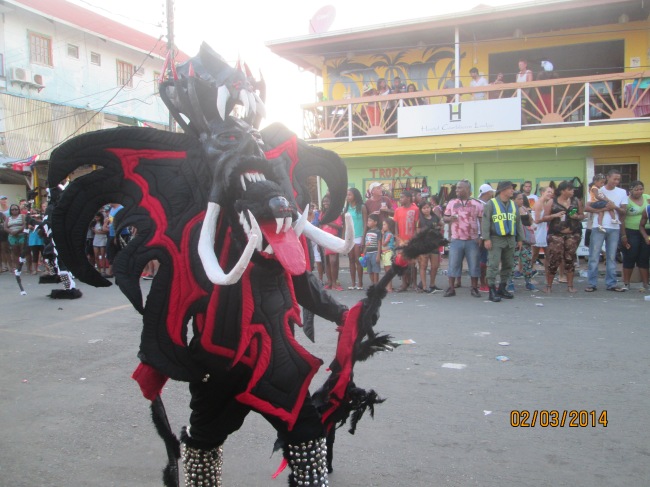 As you can see in the last picture, some boys brought sticks to hit the devils and then the devils chase them trying to whip their legs. One guy did this wearing shorts and he had deep cuts on both ankles from where he got whipped, but he didn’t even stop after. Crazy! Gradually the devils started going home, and it got dark, so we all thought it was ending, but then more appeared with light-up eyes. By the way, they all made these costumes at home form paper-mache etc and paid for it all themselves.

One guy tried to make a ring of fire on the street by making a circle of alcohol or some other flammable liquid and lighting it with a lighter:

There were a lot of police around but they didn’t have any objection to this (in England it would have been a completely different story). The ring never fully caught fire because there wasn’t enough alcohol but one half of it was alight for a bit.

The devils were dancing around and generally being weird/scary until about 7.30.

Later in the evening, a small band of drummers and percussionists went down the street followed by 3 taxis, each one carrying a carnival queen in the back (local teenage girls):

When they passed the media area with the cameramen etc, they danced together to the stage in the park:

Inevitably they had to pose for photos with a lot of people, but they didn’t mind and seemed to be enjoying themselves. It reminded me of when I was in costume at Notting Hill Carnival.

At 10pm me and Hellen decided to check out the parties and see if we could get in free somewhere because (judging from the day before) we thought the sound systems in the park would stop any minute. Casa Animal was $7, we didn’t check Iguana because we don’t like it, and Barco Hundido (our usual spot) was $5, and there was no one we knew working on the door so we had to pay, and decided to go for (surprise surprise) Barco.

Normally at the parties we know a lot of people because it’s a small island, and that’s quite fun. This evening Barco was full of tourists from Panama City which to be honest was just really annoying. We didn’t know ONE person there, and people from the city are different.

After being bored there for about an hour, we went for a walk to the park etc to see what we could find. Surprisingly, most of the sound systems were still going and there was some crazy enthusiastic dancing going on. Hellen soon went home but I decided to stay at one of the sound systems that was playing reggae/dancehall. The DJ was only about 16 but he was loving life, jumping up and down and waving his arms around at every single song he picked. I purposefully stood near the “Basti boys” (boys from Bastimentos island… mostly rastas) because when they like a song, they go mental (a bit like the DJ) and light their lighters in the air etc, which makes me laugh. You can’t really see anything but this was an attempt at a photo of people dancing:

When I was tired of dancing there (it was now like 1am) I went to see the band playing at the other side of the park, which was a lot more relaxing:

They were singing mostly salsa style songs and some people were dancing. I went to Munchies for a bit to hang out and then went home at around 2.15am because I was tired. I have no idea what time the street partying goes on until.

There were way more police than I’ve ever seen on the streets here, but I didn’t see even one problem that they had to sort out (very different from Notting Hill Carnival). I’m sure there will be a few problems late at night with very drunk men, but in general it seemed really fine, and even though I was basically alone at a crazy sound system on the street at 1.30am, I didn’t feel at all in danger. It’s 3am now and the plan is to sleep in a second and wake up at 11.30, put on a bikini and join the water party on the street.