Today I wanted to discover a new beach, so I went with my local friend Sol on a boat for $2.50 each to Old Bank, the main settlement in Isla Bastimentos because I knew there are a lot of beaches on that island. The plan was, once we got there, to ask people how to get to the nearest beaches and which are the best. A few people told us Wizard Beach is the best one to go to, 15 minutes walk from the village, so they said. One guy showed us to the start of the path and said we’d get there easily. As I suspected, this wasn’t 100% true.

From the first step we took we felt a bit unstable in our flip-flops, as the path was made of mud and it was hilly at times. Thankfully there hasn’t been much rain for the past few days so it was mostly solid and I think we were complaining a bit more than we should have been. Within 2 minutes we were dripping with sweat, but that was probably more down to the sun than the difficulty of the walk. First the path was passing by houses: 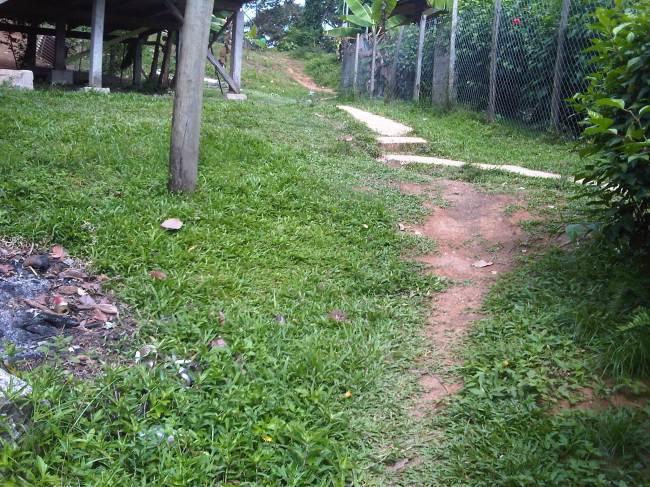 After about 10 minutes we came to a hut selling drinks so I bought a jelly coconut to drink from for $1.50 which is really expensive for here but the man said it’s because it’s hard to carry them up the hill. I think what he meant to say was “only tourists who are walking to Wizard Beach buy drinks from me so that’s why I can charge ridiculous prices”, but whatever. My body was happy to be receiving some cold liquid. You can see the man with the machete cutting my coconut: 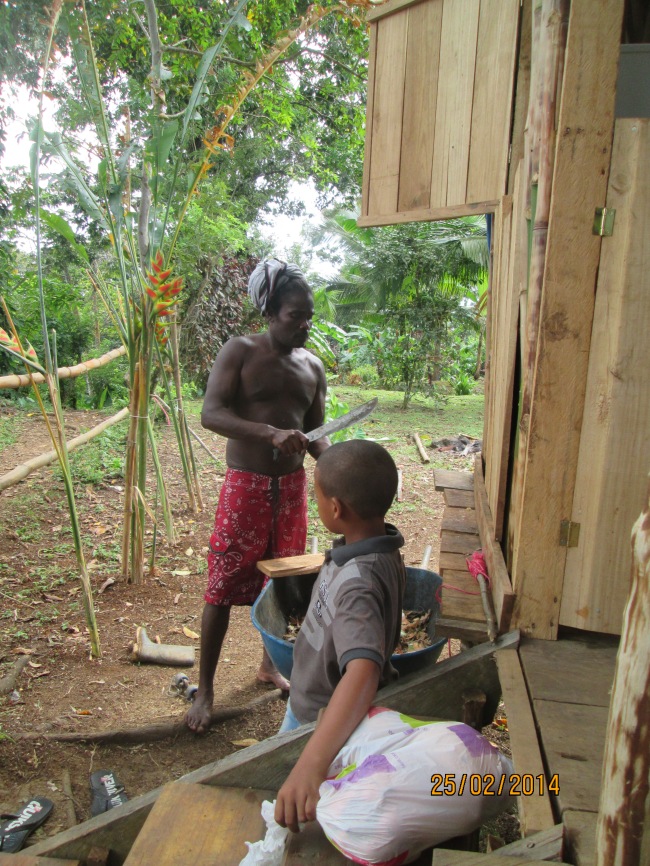 From the hut, the surroundings changed to complete jungle:

We only passed 2 people the whole time we were walking there and we could hear really loud monkeys at one point but unfortunately couldn’t see them. I was secretly a bit worried that a snake might jump out at me, but it didn’t happen. From the hut it was about another 25 minutes, mostly uphill. The last part thankfully had some stairs, otherwise we definitely wouldn’t have been able to do it in flip-flops. This is Sol on the stairs:

We were really relieved when we arrived at the beach, because we’d began to question if it really existed when we were walking though the completely deserted forest. In total it was about 35 minutes, so in typical Panama style, the Basti boys’ (males from Bastimentos are called Basti boys) 15 minutes was a lot shorter than a European 15 minutes.

The beach is one of the few remaining “natural” (free of restaurants etc) beaches in Bocas Del Toro: 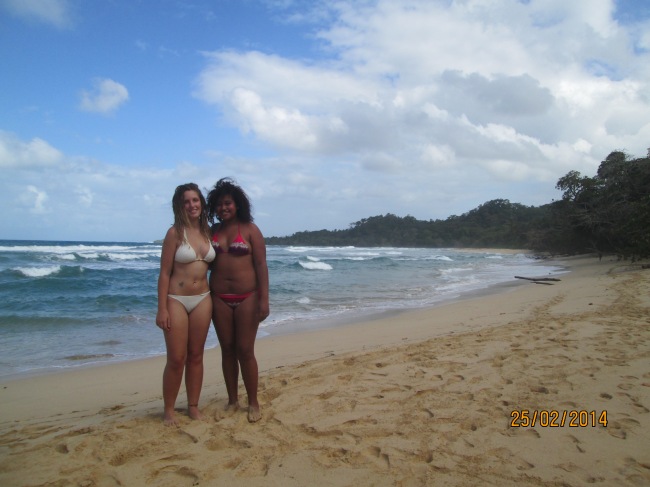 The sand was so nice to walk on, like those cushions people buy in a U-shape to sleep on aeroplanes with. Another good thing about the sand was that I got NO splinters! I get at least one splinter in my foot from all the other beaches here. As you can see in the picture the water was bright and clean (another thing you don’t find at all the other beaches), but the problem was the waves. We did go in the water but they were quite annoying so we got out after about 10 minutes and read our books.

There were 2 policemen chilling on the beach the whole time we were there, and I think it’s because there have been some reported robberies with machetes on the path to the beach and on the beach. Apparently the main culprits are in prison now (I have no idea if that’s true or not) and the police are paying more attention to it now. I think you’ll normally be fine but maybe don’t bring an expensive irreplaceable camera just in case. (To be honest I’m sure you all have travel insurance anyway).

We left at 5pm in order to get back before it got dark because we would definitely trip over at least 10 times if we attempted to walk back through the jungle with nothing but our phone lights.

Back in Old Bank, I went to my friend’s house because she re-twists the roots of my dreadlocks every month, so by the time we wanted to leave the village it was about 7.30 so there weren’t boats going to Bocas regularly. The only advice we were given was to stand on the dock and wave our phone lights in the air in the hope that a boat would notice us. Our arms were beginning to ache but thankfully someone came for us in about 20 minutes. We payed $3 each to go back.