Diablitos basically translates to little devils, and they’re the name for the crazy looking things that have been running up and down Main Street for the past week or two. They’re people dressed up in scary carnival style costumes with bells so they make noise when they’re stamping around, and they all carry a black stick for hitting people! Obviously people all stop to watch them stamping/dancing around and making weird movements, and sometimes they creep up to people to try and hit them, which then obviously causes people to run away screaming, and their friends laugh at them etc. I’ve actually seen some of them hit people quite hard, so I hope they don’t decide to pick on me! This is one I saw from my balcony: 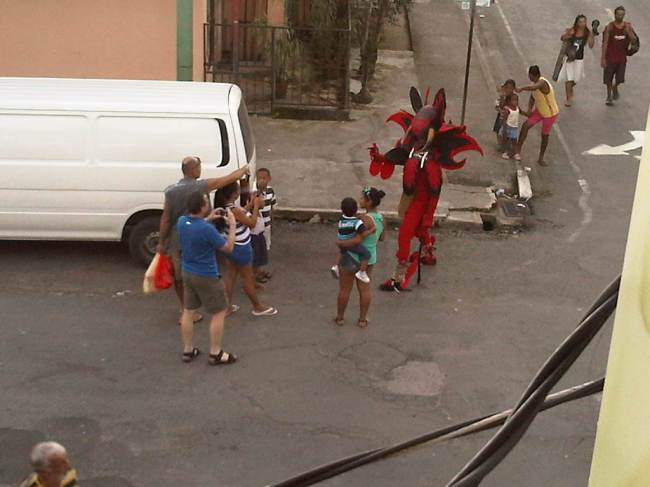 You can see the black stick in his left hand.

I asked a local guy what it was all about and he said they have them every year during the run-up to carnival (even though carnival doesn’t start til March 1st, so I wouldn’t exactly call this the run-up, but I think people here just make excuses to have crazy things like this). They’re not the main carnival attractions but apparently they are still around during carnival, doing the same thing. He didn’t know what the actual tradition was behind it, and no one seems to know. I also can’t find the answer online because there aren’t many internet resources writing about Bocas. I’m pretty sure they would be banned in England!