The other day Hellen and I decided it was time to take a few days off from our nocturnal party girl lifestyle and go to the beach and get our tans back. We set our alarms for 2pm (normally we wake up at like 4) and went to the nearest beach on this island because we didn’t want to pay (get ripped off for being white) for a boat to Isla Bastimentos or anything like that. In one of my earlier posts, I called this beach Playa Istmito, but I’ve now found out no one actually calls it that, and it has a couple of different names here, for example La Feria or Las Cabanas.

It’s kind of dirty there so it’s not a well-known or popular place for tourists who want to swim/sunbathe really. There are restaurants along the beach with pool tables etc and they play really traditional Panamanian music and are mostly used by locals, from what I could see. The bike ride is about 20 minutes from town.

I don’t think you’ve ever seen our lovely bikes (with no functional brakes or anything), so here they are:

Mine’s the one with the plastic basket. Classy I know!

Normally you have to lock your bikes ‘cos sometimes they do get stolen, but we were just lying on the sand a few metres from them so we figured it was fine, and thankfully no one was mean enough to come and take them when we were chilling there with our eyes shut.

This is what you could see from our sunbathing spot:

There wasn’t actually that much sun so we got bored quickly and decided (because the sea at that part was literally black) to walk/cycle along the beach to find an area to swim: 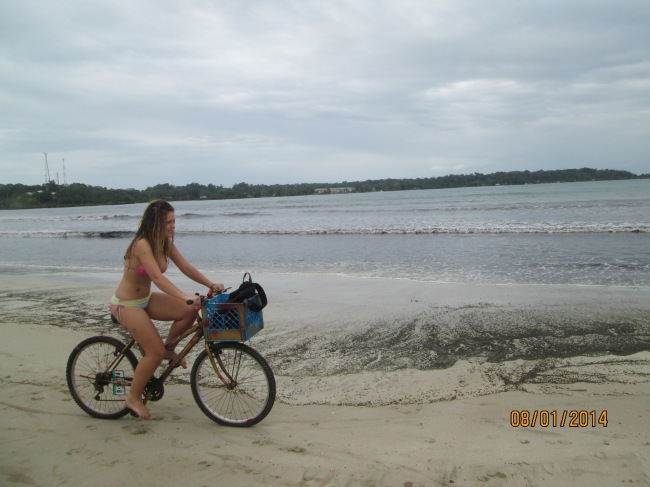 There were some waves that kept semi knocking us over, which was a bit annoying, and the lack of sun was still also annoying so we gave up and went to the first restaurant you come to from Town side which I think is called Sports Bar or something. We got a bit plate of french fries (yeah I’ve had to stop calling them “chips” because people here use American words when they speak English) for $1.50, so a bit cheaper than in town, and just stayed there talking for ages.

It’s not the prettiest beach but it’s the cheapest to get to if you have a bike (because it’s free to cycle obviously), there were no sand-flies biting us, and the restaurants aren’t a rip-off, unlike on some other beaches.