I’ve been to Aqua Lounge 3 times now so I should probably write about it. It’s a hostel/bar on Isla Carenero, a short $1 water-taxi ride away from Bocas. It has “swimming pools” (they cut circles out of the wooden floor of the outside part and the sea is underneath so they’re like swimming pools), swings over the sea so you can jump in off them, a trampoline (which has always been covered up recently so I’m not sure if it’s working), a table for beer-pong in the days/evenings, and wooden surf-simulator things (a piece of wood on top of a wooden wheel kind of thing and you have to balance on the piece of wood).

It’s painted bright green and the atmosphere is kind of “woooo let’s go crazy with other tourists” (which was obvious before I’d even been there) so I managed to put off going there until last week (until I’d been in Bocas for almost 2 months) because that’s not really my kind of thing. The first time I went was in the day time and there were some guys I knew there so we just messed around on one of their Ipads, had something to eat (the food is good/cheap but the restaurant isn’t open all the time) and swam and went on the swings. We were there until about 7 so we saw the sunset: 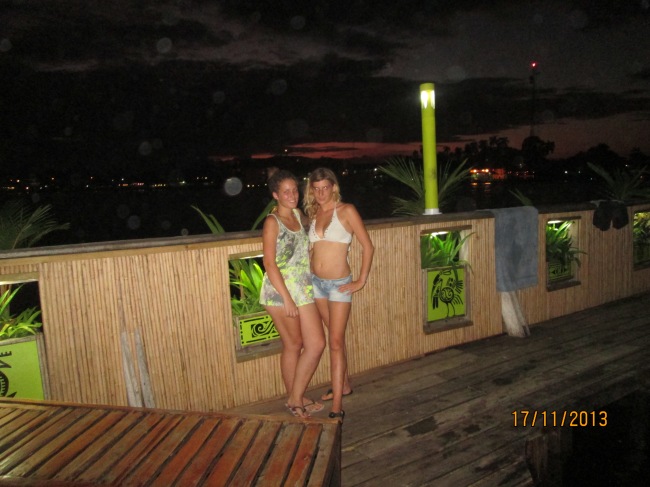 The second time I went there was last Wednesday. Their party nights are Wednesdays and Saturdays, so on those days La Iguana (the main tourist bar on Isla Colon) is shut because everyone goes to Aqua Lounge so there’s no point them opening. I was skeptical about going because I imagined it would be full of drunk Americans dancing like idiots, jumping in the water and taking shots all night, and I didn’t think the music would be anything I was interested in. My friends Aude and Hellen persuaded me to come somehow.

To get into Aqua Lounge on Wednesdays and Saturdays you have to pay $5 (cover charges aren’t common here) but you get a token for a free drink so really you’re only paying like $2 to get in. When we got in I looked at Aude and Hellen like “I TOLD YOU SO” because it was FULL of typical tourists and the music was some horrible electronic stuff. Aude said to Hellen “Zoe’s allergic to tourists”. When Beyonce – Single Ladies came on, they dragged me to the dancefloor, but I escaped back outside a few songs later and decided that the swings by the sea would be my new home until some reggae or reggaeton was played.

Some crazy people stripped down to their underwear and jumped into the sea and then put their clothes back on after so were soaking for the rest of the night. I don’t want to sound like a granny but I really don’t think it’s worth it to be soaking for the rest of the night, and I don’t think alcohol and swimming mix really well, but hopefully no one gets hurt.

A couple of local people did come in, including a group of guys I’m kind of friends with, and I spoke to the (local) barmen too, so it wasn’t so bad, and eventually at about 12.30 the DJ came to his senses and I went to the dancefloor and danced with the group of guys for like an hour until the bar emptied out and everyone took a boat back to Bocas. Sunday was basically the same, so now I know to go late to skip out the rubbish music at the start. This is Hellen, me and Aude on Sunday night (we all wore black on purpose to be matching, just to be silly):