Almost every day when I’m on the balcony near the door to my room at the hostel, I hear loud music coming from a house on a nearby street and if I look at the right angle I can sometimes see people drinking/dancing there. Since my first week here I’d been considering finding the house and asking if I could join them because I almost always love their music and find myself singing along on the balcony.

I had a good/sociable weekend and yesterday evening (Monday) I was still in a party/social mood because of it, so at about 8pm I decided I was at least going to find the house that played the music and decide once I’d found it if it was worth trying to talk to the people who live there etc or not. It seemed like it was on Calle 6ta (6th Street) which is known as the bad/ghetto part of Bocas, and it’s way less touristy than the other streets. It only took a minute to find the house (because I live at the end of one street and their house is basically at the start of the next one), and luckily as I was passing, one of the guys dancing on the balcony kind of thing at the front of the house called me over.

Some people may say that in that situation it’s not a sensible/safe/respectable thing to do to go into a random guy’s house on the “bad street” and accept a drink from them and start dancing with everyone, but I really think you need to do some silly/spontaneous things to enjoy your life and experience new things etc. On the balcony was (I’ve forgotten everyone’s name) a woman with her baby (she normally lives on the mainland but was visiting her relatives and staying in their house) and 4 guys in their 20s who (I think) were all related somehow. They were all really welcoming (and surprised that I knew about that music) so I told them I was going to go back to my hostel to see if my friend Aude wanted to come, if that was ok with them. They said it’s fine as long as I make sure I do come back because they’ll be waiting for me!

Aude said she’d come for a bit, which I was surprised about because she’s not into that music and it was a bit of an unusual suggestion, but when she got there she started dancing like I’ve never seen her dance before! It was so much fun, she was really getting into it. One of the guys took a liking to her and they were dancing together for a long time. Soon after, a group of kids appeared in the house (more relatives) and started dancing too. Dancehall music is typically danced to in quite a sexual nature which isn’t appropriate for children, but one of the girls who must have been about 9 years old, knew EVERY dancehall move. I couldn’t believe it… and the woman was encouraging her!!

The kids decided to move their party to the street and soon it turned into a competition of dancing combined with cartwheels etc. I don’t know how to do those things but Aude told me she knew how so I encouraged her to do it, and the kids were surprised and happy, all clapping, when she cartwheeled down the street. I tried to take a picture of her but the timing didn’t work, but inevitably once the camera was out the kids all wanted to use it: 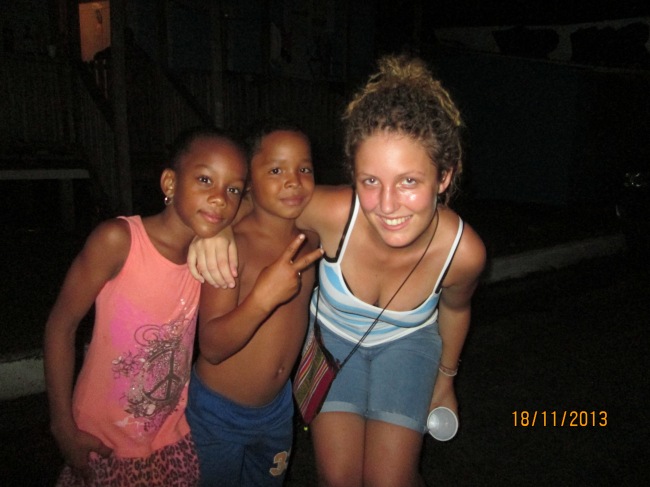 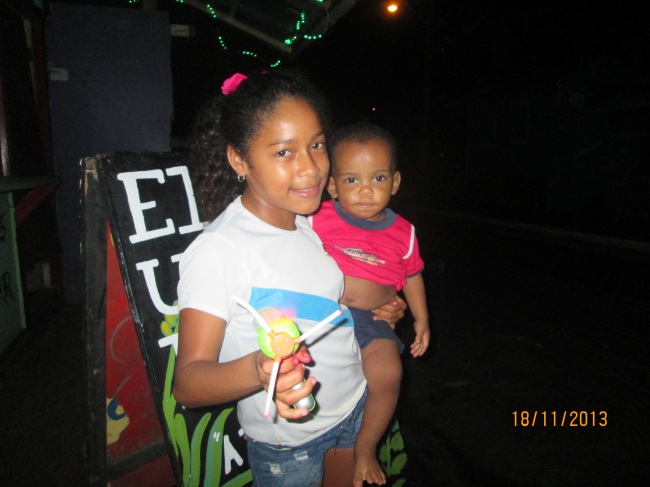 Outside, me and Aude were still too hot so I jokingly said we should strip and go in the sea. She actually thought it was a good idea and we walked towards the sea (10 metres away). Everyone else came too and before I knew it, Aude and the guy she’d been dancing with were swimming in the sea (she only took her tshirt off). I decided I’d rather stay dry. When she came out she had a deep cut on the bottom of her foot from a rock in the water so the guy carried her to the hostel so we could clean it etc. She went home soon after because she couldn’t really walk, and today she went to the hospital and they gave her cream and antibiotics!

When she left I went into the house to talk to the adults (an older woman relative was there too) and I ended up staying there until midnight. I had pictures on my camera from England so I showed them some. The thing they were most interested in was the fact that we have cycle lanes and marked-out bus stops!

When I left, I said how much I appreciated being welcomed into their home etc and they said I can come there and hang out any time, and when I mentioned that my mum’s coming to visit in February they said I have to bring her there to meet them too. I pointed to my bedroom door because you can see it from the back of their house, and I told them I’d wave when I got back. One of the guys walked me to the hostel gate and sure enough some of them went to the back of their house to wave to me a few minutes later 🙂