In my “Beaches” post I mentioned the river near Ochi called White River that runs through the Reggae beach. There are other spots you can drive to which are further uphill from the beach where you can access the river. We went to two of these places. The first time we went I fell in love with it!

The drive up was difficult because the path was so steep and uneven so for some parts we had to get out of the back of the car to reduce its weight! We arrived at the spot and it’s basically a field next to the river. There’s a jerk hut there (with toilets, thank God), run by a Rasta who also helps keep the place clean etc. There isn’t an official entry fee but when we left we gave him the equivalent of about 4 US dollars.

When we drove across the field towards the river it was quite deserted, but then I saw a nice shiny car with its doors open playing music from it and some Jamaican people dancing etc. It turns out one of these people was Megan’s friend, Jody, who I’ve mentioned in some of my other posts. We all introduced ourselves and immediately Trouble (one of the Jamaican guys) offered us a drink.

It was only about 1pm but they were drinking the most common spirit/mixer, rum and Ting. Ting is a grapefruit-flavoured fizzy drink that people drink there as often as people in England drink lemonade or Coke. This picture is Trouble breaking the “party ice” to put in my cup with rum and Ting: 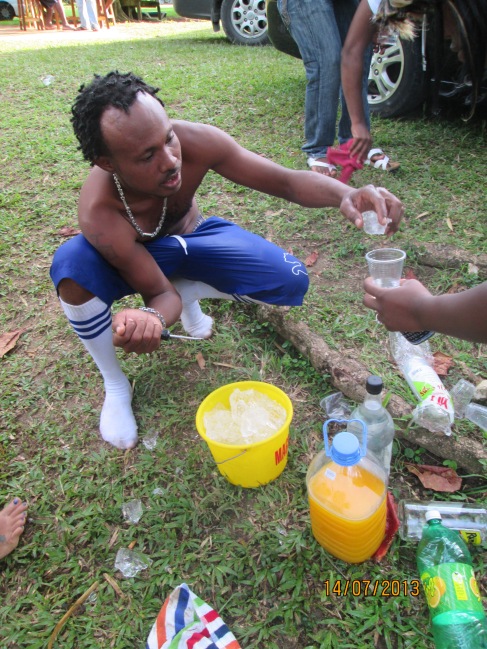 The fact that it was 1pm and there were only about 10 of us there didn’t stop there being a party. After a couple of drinks I was dancing with everyone: 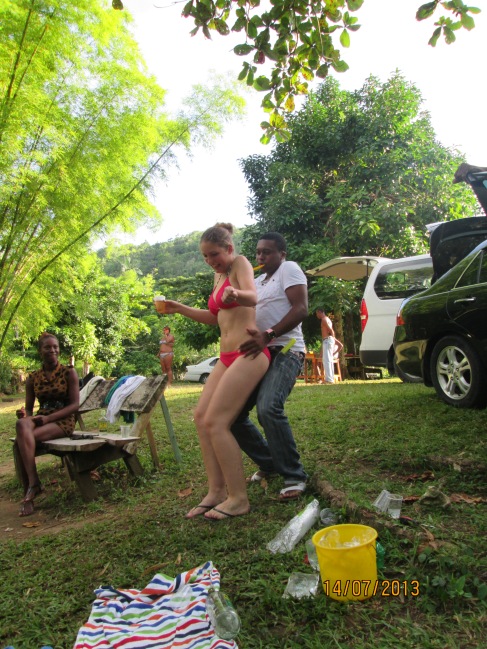 The river itself was really nice to swim in. Apparently it cures hangovers too! I preferred it to the sea because there were (obviously) no waves and it wasn’t too deep (I’m not great at swimming). Also it actually cleaned you as opposed to getting you all salty. This is Megan and Patricia in the river: 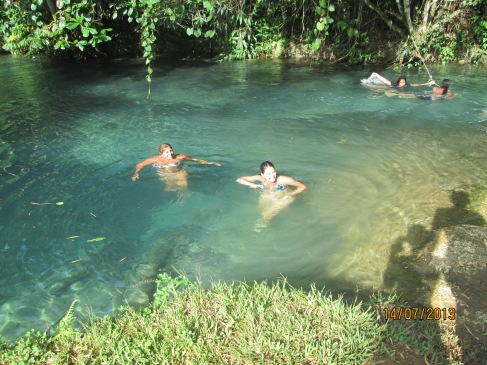 We said we should have an overnight party one weekend there with tents and everything, but it never happened. I’m going to try and make it happen next time I go 🙂